A Horse by a Pond and Other Congruities in Medieval Iranian Ceramic Decoration: Abstract for lecture

Home » Iranian and Persian art and archaeology » A Horse by a Pond and Other Congruities in Medieval Iranian Ceramic Decoration: Abstract for lecture

Posted on Nov 25, 2014 in Iranian and Persian art and archaeology, LISTINGS 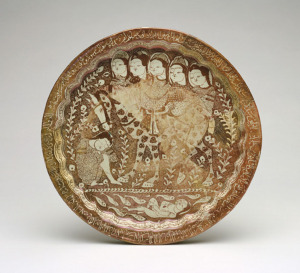 Abstract by Dr Oya Pancaroğlu, received and published 25 November 2014, of a forthcoming lecture entitled ‘A Horse by a Pond and Other Congruities in  Medieval Iranian Ceramic Decoration.’

A significant proportion of Iranian ceramics painted in the luster and mina’i techniques between the late twelfth and early thirteenth centuries were decorated with figural subjects.  While the majority of these can be described as generic images belonging to the repertoire of courtly activities such as riding, drinking, music-making and enthronement, a number of vessels and tiles among them can be identified as having narrative imagery.

This lecture will focus on the question of visual narrativity in the case of a famously enigmatic image on a lustre-painted plate (above) in the collection of the Freer Gallery of Art.  When the plate first came to the attention of art historians in the early twentieth century, the image was identified as a depiction of the story, as told by Nizami, of Khusraw Parviz’s encounter with Shirin while she bathed in a spring.  This identification was later rejected in favour of a non-narrative interpretation which has since held sway.

The lecture will re-examine the criteria used in the argument against narrativity and suggest a more nuanced and inclusive approach which is not constrained by only searching for congruities between image and text.  By adopting a broader perspective on narrativity and accounting for the presence of poetic inscriptions, it will be suggested that the decoration of the plate was designed to evoke literary, ethical and courtly associations which surpass conceptualizations of narrativity defined as a text-image binary.