Art history on a slippery soap

Posted on Aug 20, 2013 in ARTISTS, Contemporary and modern art from the Korean world, LISTINGS 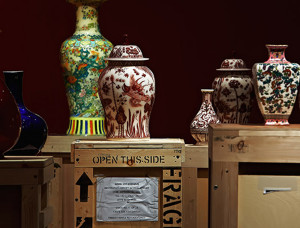 Seen earlier at the London Korean Cultural Centre (KCCUK) and other venues, Shin’s representations of antique Chinese vases — and some famous European sculptures — reference an important if rather embarrassing phase in art history, when Europe and the Americas revelled in their experience of what they believed to be a quintessential expression of Chinese culture of the 18th and 19th centuries.

In fact the ceramics were made almost entirely for export and seldom were seen by Chinese consumers. Shin’s work points to that “cultural mistranslation” and the elision of meaning, whether accidental or intended, across history and continents.

Shin reproduces porcelain pieces produced in China for consumption in the West, translating the form directly from the original. As a curatorial statement from the gallery points out, by rendering the objects in a seemingly fragile and transient material, such as soap, Shin questions the authority and originality the original vases demand.

Often presenting the new vases on the packing crates in which they are shipped from location to location further emphasises the sense of dislocation and transformation.

The ‘Ghost Series’ translucent soap vases imitate glass, further evolving the notion of the transience of the original by stripping the forms of both their perceived solidity and their decorative markings, leaving only an echo of the original form.

Additional works include a series that reworks classical European sculpture. Crouching Aphrodite presents the artist’s figure as a marble antiquity but modelled in soap, the soft and vulnerable materiality of the medium a counterpoint to the canonical view of this tradition presented to her as a student.

In the Kuros series the soap sculptures have been exposed to the weathering of the elements, their disintegration mirroring that suffered over time by ancient sculpture created in seemingly more durable materials.

Meekyoung Shin alternates living and working in Seoul and London and studied atSeoul National University and London’s Slade School of Art. Initially trained in Korea in a classical tradition of European sculpture, Shin subsequently moved to London. The many objects removed from their places of origin and placed in vitrines and on plinths in museums and other art spaces as representatives of other cultures were among her inspirations in London.

Shin apparently first thought of using soap in her art in the 1990s after encountering classical sculpture in the British Museum and the Victoria and Albert Museum. “I felt the quality of its material looked like soap,” Shin says. “It’s a very different type of stone with Korean sculpture. I thought that this is a foreigner’s alien viewpoint. Studying in Korea, you see Western art in books. These marble sculptures are very familiar as images, but not as real objects.”

“Soap is fragile and time-consuming. There’s never been a technique for making big sculptures with soap. I had to learn myself. It’s a similar density or texture to stone, but soap’s nature is opposite – ephemeral not permanent. And soap has a fragrance, which is an important aspect of my work. You have to be there to experience the smell, like travelling to new places.”