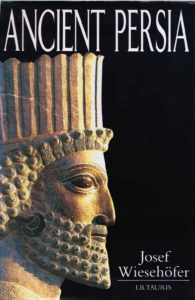 Ancient Persia, by Josef Wiesehöfer, surely must rate as one of the most underrated books on Iran, perhaps because it announces itself as a book about ‘Persia’ rather than Iran of the news headlines.

It further delivers—unintentionally, no doubt—a disincentive for those keen to learn more about contemporary and modern Iran. Yes, the one often cited in the West’s War on Terror and what precedes or follows that doctrine.

Even so, the book’s merit remains undiminished since it made its public appearance in 1996 under the auspices of Saeed Bakhordar, formerly of the Iran Heritage Foundation.

The first thing you note is the honesty and integrity of the narrative and the author’s cautionary asides throughout, ostensibly directed at unnamed academic colleagues’ tendency to run away with major irresponsible assumptions. We thought only lazy journalists did that. But, no, academics indulge, too, apparently all the time, with often grievous consequences.

Wiesehöfer’s historical narrative demonstrates and tells us how tolerant Iran was and has been through the ages—tolerant of invaders who sought and achieved regime change, as with the Arab conquest, with disastrous consequences for the peaceful peoples who inhabited Iranian lands.

Irony of ironies, the Sassan rulers who were at the receiving end of Arab excess, including Arab cultural destruction of Zoroastrian heritage, were more than usually accepting of foreign advances in medicine and science and did much to adopt and adapt and disseminate knowledge wherever they went. Both the Arab world and ancient India owe the Sassanids a great debt for facilitating access to scientific advances of the era, just as both contributed to Sassanid and eventually Arab and Europe knowledge.

As the author points out, pre-Islamic Iran was distinguished by the fact that it not only cultivated its own traditions and beliefs, most notably the Zoroastrian view of cosmic and worldly events, it readily assimilated concept and thought from other cultures, which it “mixed, transformed and passed on.”

The book is impressively exhaustive in its scholarship and for its convincing conclusions based on learned forays into the past, but Wiesehöfer modestly points out that he lays no claim to having the last word.

Ancient Iran and its vast territorial expanse that included Afghanistan, Central Asia and Caucasus, parts of the modern Middle East and north Africa, he argues, cannot have revealed all their secrets and there may still be “many a surprise” concealed in those territories. Modern warfare has taken its toll on the heritage of contemporary Middle East and the material losses from recent conflict have been manifold and distressing, but all is not lost, because all is not found yet. ©Sajid Rizvi.