One up on the avant-garde

Home » ARTISTS » One up on the avant-garde

How time flies and its tangible and intangible outcomes linger around and sometimes sustain us. The October Gallery in London celebrates its 35th anniversary in April 2014 and, according to its founders, the date coincides with the birth of the transvangarde movement, writes SAJID RIZVI. 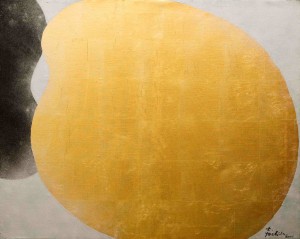 The gallery lays claim to having coined the phrase, which means beyond — but also perhaps through — avant-garde in the widest sense possible. Art critics and art historians elsewhere also have pinned the flag of the transvangarde on their proverbial lapels, if not affixed to their foreheads. In the event what counts is what has been achieved and the gallery can certainly take credit for putting together, introducing or making better known a heterochrome and heterogenous bunch of artists plucked from across the planet and planted, tentatively but with astounding results, in the midst of London.

The gallery’s Victorian edifice has been home to many visiting artists and its lightly converted brickwork space continues to serve as a gallery, a theatre and a general venue for creative expression across myriad disciplines. It’s also a regular watering hole, somewhat loosely in the style of old Baghdad caravanserais, of visiting artists  residing to create or simply to broaden their minds in the gallery’s ever melting rainbow of diverse milieux.

‘Cutting edge,’ now almost a cringe-worthy cliché, is still an appropriate appendage suited to most of October Gallery art — and not only because of a somewhat pedantic fact that one of its most famous sons, El Anatsui, actually rose from the sawdust off many of his early creations, shaped from found wood with the help mainly of a chainsaw and an unchained imagination.

El Anatsui is now almost a global brand, in the style of many tokens, badges and crushed cans El liberally applies in creating fabulous faux textile pieces — actually mostly metal from bottle caps and so on. A selection of works still on the gallery’s inventory recently was seen at Art14 in London and before that at the Royal Academy in 2013, to mention just the London venues. El Anatsui may have contributed to making ‘cutting edge’ sound hackneyed and obsolete since the work transcends categorisation or any hard-and-fast definition.

To be sure, not all artists on the gallery list have won an equal amount of commercial success — it would be downright silly to expect that to happen. But the diversity of their work has guaranteed multiplicity of audiences. This is celebrated in the forthcoming exhibition, likely to show again the work (in alphabetical order) of El Anatsui, William S. Burroughs, Brion Gysin, Romuald Hazoumè, Rachid Koraïchi,  Laila Shawa. Gerald Wilde, Aubrey Williams and Kenji Yoshida.

So, what is Transavantgarde? More fitting perhaps is the question: how does transvangarde (capitalised or not) differ from avant-garde? That’s a tough call. As example one only has to look at who else has endeavoured to put their stamp on the hallowed category. Art history (or some whimsical interpretations of it) tells us a form of ‘trans-avant garde’ was all the rage in Italy of the 1970s, though it flew its flag under Neo-expressionism. This was a period, mind, when numerous ‘children’ of expressionism (or Expressionism, take your pick) populated spaces on both sides of the Pond, including as far apart as old Europe and San Francisco Bay. Art critic and curator Achille Bonito Oliva is among counter-claimants to the October Gallery’s innovation, albeit to the point of irrelevance (should we care about who got there first?). The period was also marked by fractious infighting, marginalisation (of women artists, for instance) and insularity in the various movements that laid claim to the avant-garde or offshoots thereof. Happily none of those attributes can be ascribed to Transvangarde as we know it, thanks in a large part to the October Gallery’s curatorial forays over the years and sustained efforts to forge the new genre.

The gallery has always striven to exhibit contemporary art from geographical extremes, the near-and-yet-so-far and sometimes seemingly of improbable origin. The team work between Chili Hawes and Elisabeth Lalouschek, gallery director and artistic director respectively, has ensured an ongoing conversation that has led to a fluid succession of curatorial choices. As Chili Hawes points out, “The gallery became a stage in the centre of London where an experimental piece of new drama was enacted and constantly developing, where artists and audiences alike participated in what Brion Gysin called, ‘third mind’.”