Recalling the Future: Iranian art since the '79 revolution

Home » ARTISTS » Recalling the Future: Iranian art since the '79 revolution

Posted on Jan 16, 2014 in ARTISTS, Contemporary and modern art from the Iranian world, LISTINGS 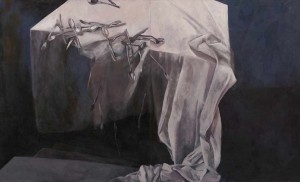 The work of 29 Iranian artists produced before or after the 1979 revolution that toppled the Shah and installed the Islamic Republic is on view 16 January-22 March 2014 at the University of London Brunei Gallery.

Many of the works on display are being shown in the UK for the first time.

Recalling The Future challenges assumptions about ‘Iranian’art. As Iranian artists in the 1960s and 1970s increasingly combined signifiers of their local, national identity with formal approaches fit for the increasing modernity of their environment, the exhibition demonstrates artwork that radically shakes up the basic conception of the country’s modern canon. The artists on display reject notions of ‘Iranian-ness’ as a fixed, timeless entity, and investigate the social and historical construction of identity, as well as their contribution to problematic political situations.

In various ways all of the artists in the show question what it means to call them or their work ‘Iranian’ as from the 1960s onwards — while Shah Mohammed Reza Pahlavi still ruled — a wave of young artists began to produce a new kind of Iranian modernist art, which responded to the increasingly modern economy, state and technologies which were reshaping the country, while also aiming to retain an ‘authentically Iranian’ identity.

By 1979, this same idea of being ‘authentically Iranian,’ as a form of opposition to Western colonisation, had been taken up by a wide range of intellectuals, clergymen and politicians, who joined together to bring about a revolution against the Shah. ‘The artists on display reject notions of Iranianness’ as a fixed, timeless entity, and investigate the social and historical construction of identity, as well as their contribution to problematic political situations.

The artworks in ‘Recalling the Future’ questions the assumption that a single, authentic national identity can be found in a country’s history and treated as timeless. Instead, they suggest that such identities are always a construction, made in a particular moment, according to certain political aims. These works do not define an image of ‘Iranianness’ or search for its true meaning in the past, they uncover the processes by which identities are constructed, and consider what kind of a future they might lead to.

Working across a variety of media including painting; sculpture; photography; video performance and installation pieces, the artists draw attention to the building sites of Iranian national identity, with a focus on the devices and techniques through which seemingly ‘traditional’ narratives are reproduced and maintained in the present.

The exhibition is guest curated by Aras Amiri, David Hodge, Hamed Yousefi, and Rozita Sharafjahan. Alongside the exhibition, there will be several public events including film screenings, artist talks, and a major symposium at the Brunei Gallery, SOAS on Feb. 1, 2014.