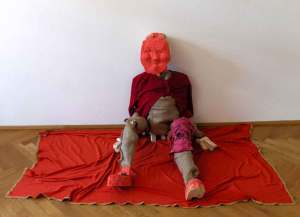 In the exhibition 30 October– 13 December 2014, Roza El-Hassan presents mixed media installations of wooden figures, sculptures, wall drawings and works on paper that merge contradictory qualities into what a curatorial statement describes as “multifaceted and nuanced reflection on the human condition.”

Assembled from pieces of roughly hewn wood – small splinters joined to heavy blocks – the figures are carved by a hand alternating between the violent and the gentle. Blank or rudimentary faces combine with sketch-like body parts or carefully contoured planks into intuitive impressions: internal states projected in wood. Outer roughness is contrasted with a calm radiating from within, further enhanced by the partial colouring of some sculptures in light washes,with detail added in pencil.

The solemn works are balanced with more energetic pieces, like the haphazardly clad Red Man (2007), whose laughing face is painted a bright scarlet, matching the blanket on which he is sitting. Similar qualities are present in El-Hassan’s works on paper, and throughout the artist’s career her drawings have been the constant holding all other activities together. Some of these works come about as sketches for sculpture, performance and architecture; time is a central aspect, and many are produced in a diary-like fashion.

Abstract tangles mix with vague figures, collaged pieces of torn paper and fabric, translucent fields,vibrantly colored shapes, smudged pencil. As grave as the subject matters may be, the lightness and openness of the work suggests a process of searching rather than stating, a subtle sensitivity in fraught political climates.The tentative, probing nature of El-Hassan’s drawings is reflected through her entire practice, and what may at first glance seem makeshift is always underpinned with careful formal and material consideration. By letting her work sprawl in multiple directions, the artist creates a whole that encompasses all human hopes and fears, embodying currents of unrest and trauma as well as dignity, protest, and artistic integrity. El-Hassan’s sculptures have been described as at once solid and ethereal.

El-Hassan’s work includes social intervention and social design projects involving materials like wicker and adobe, objects and drawings that have been exhibited internationally.

El-Hassan was born in Budapest in 1966 and works between Budapest and Berlin, where she is currently a resident at Künstlerhaus Bethanien.