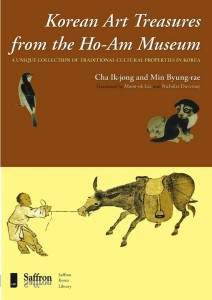 Ho-Am Art Museum is Korea’s largest private museum with more than 15,000 precious objects, including irreplaceable national treasures. The museum building, inspired by traditional Korean architecture, is complemented by Hee Won garden complex. Written in an accessible simple style, this is an introduction to the museum holdings and current status.

The museum building is inspired by the traditional lines and grace of Korean architecture. The Hee Won garden complex, a classical Korean garden, is surrounded by hills which appear in a soft hue of pink during the spring due to the cherry blossoms.

This book is an introduction to the museum, its history and holdings and current status. The book by Cha Ik-jong and Min Byung-rae began as an introductory volume for youngsters, it was translated by Moon-ok Lee and Nicholas Duvernay, then edited and updated by Sajid Rizvi, Commissioning Editor, Saffron Korea Library.

The Ho-Am Art Museum was established in April 1982, initially as an art gallery, with about 1,200 pieces of Korean works of art that were collected over a course of 30 years by the late Ho-am Byeong-cheol Lee, founder of the Samsung Group.

The authors, Cha Ik-jong and Min Byung-rae followed the museum’s development over a long period and in the process acquired a firsthand knowledge of the collection.