A Dream of Humanity highlighted in Photography Award

Art photography, if correctly used, can be a powerful medium, employed to highlight humanitarian crises that recede from news headlines once they have been reported a few times.

HIPA, the $400,000 photography prize, is aiming to avoid that pitfall of art and humanitarianism. On 26 July 2015 it launched A Dream of Humanity exhibition on the banks of the Seine in Paris. HIPA is the user-friendly acronym for The Hamdan bin Mohammed bin Rashid Al Maktoum International Photography Award launched from Dubai, United Arab Emirates, in 2011 and now in its fifth cycle.

Featuring photographs of Reza (aka Reza Deghati, the Iranian-French photojournalist), and other photographers selected from HIPA’s Faces initiative in the Syrian refugees’ camps in Jordan,  A Dream of Humanity [26 July-15 October 2015] is seen as a potentially influential device to keep focus on the humanitarian crisis enveloping continents. 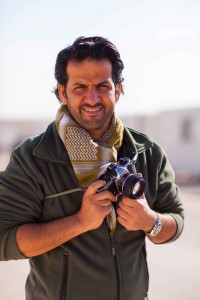 HIPA Secretary General Ali Khalifa bin Thalith (pictured) said, “HIPA undertook the sponsorship of A Dream of Humanity exhibition to be part of our wide-ranging humanitarian responsibility and to document the living conditions of global refugees and their everyday struggles. We also feel that it is our moral obligation to raise awareness of the current plight of Syrian refugees and their bravery in telling us their stories by staring into the lens of a camera,” he said, citing his previous project in the northern Jordan camp, wherehe provided photography training to refugee children and produced the Faces book.

“HIPA is a photography competition which is not restricted by the artform but rather empowered through it to change the lives of as many people as possible,” Bin Thalith added.

“This can be done by repeatedly documenting the hardships faced by global refugees, and what better photographer to do this with than Mr Reza Deghati, who is a global ambassador for photography and the humanitarian aspect of it.

“Reza’s photography has changed the lives of many people around the world and we hope to impact more people in the coming period through our joint project, A Dream of Humanity,” he added.