Posted on May 1, 2015 in Contemporary and modern art from Africa and African communities, Critical Choice 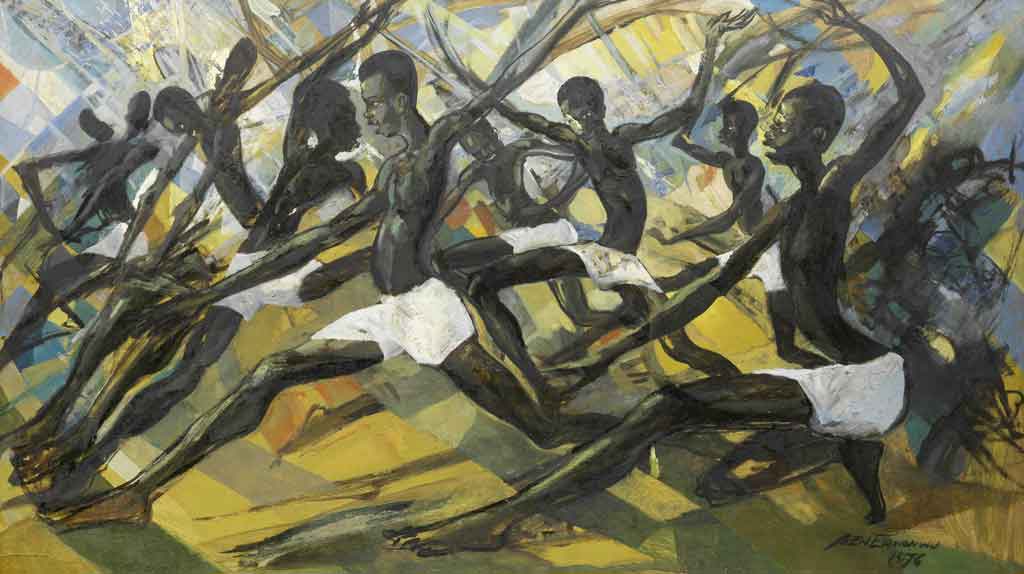 Anyone on a learning curve while approaching contemporary and modern African art is likely to be startled by the use of the term ‘modernist’ for an African artist. Ben Enwonwu (1917-1994) , honoured by Queen Elizabeth II and posthumously worshipped as an African modernist, died unrecognised by many bastions of European art establishments. A handful of western exhibitions and eulogies in his lifetime cannot and indeed should not be flagged up as the sum of endorsement he received or deserved before passing.  An ambitious new exhibition at the recently relocated Gallery of African Art in Mayfair, London, serves to deliver a considered corrective while drawing the new, 21st century audiences to his huge talent’s product and, through it, the whole panoply of African art of the last century.

BEN ENWONWU MBE: Seven Decades of Artistic Production (30 April – 6 June 2015) is a timely and well-deserved tribute to the late Nigerian master’s impressive oeuvre, a vigorous nod to his unflagging output over that long period, a quasi-academic retrospective and a survey show to boot for the uninitiated. Compared to many masters of the East or the West who have gone recorded, and even those of the Africa slowly being nudged into limelight by modern appetites and tastes, the seven active decades is more than a lifetime. Building narratives around such a long stretch of creative production is a challenging prospect, so anything new about Enwonwu’s art that’s attempted by galleries, media or academia is a welcome afterword to Sylvester Okwunodu Ogbechie’s excellent Ben Enwonwu: The Making of an African Modernist. [Rochester, NY: University of Rochester Press, 2008]

Curated by collector and itinerant gallerist Ayo Adeyinka, Seven Decades brings together Enwonwu’s pencil works, paintings and sculpture, a rather sparing but inspiring selection from an impressive body of work. Without doubt it marks Enwonwu not only as a modernist from a specific western art historical standpoint but also as a pioneer in the nascent age of contemporary African art practice as we know it. It’s a moniker easily bestowed on Enwonwu, true as much of what’s been afoot on the continent as of the various phases of art from the diasporas that have radiated from Africa over the years–artists who made Europe or the Americas their place of abode, practice and source of livelihood. Neither Ayo Adeyinka not the gallery can be faulted for describing Enwonwu as a “pioneering Nigerian modernist,” though perhaps “pan-African modernist” would be appropriate, too, and not overgenerous or hyperbolic.

Arranged chronologically in GAFRA’s new viewer-friendly space, the exhibition kicks off with Return from Stream, which Enwonwu produced in 1938 after graduating from Government College Umahia, one of three colleges British colonial clergy built in Nigeria, spawning an impressive school of intellectuals and artists, some among them now household names in the West. Novelist Chinua Achebe (1930-2013) and human rights martyr Ken Saro-Wiwa (1941-1995) come to mind.

By the 1950s Enwonwu was famous, the first African artist to receive a royal commission for a statue of the British sovereign, head of a substantial if diminishing empire that included dominions in Africa and the Caribbean. The Queen’s bronze portrait, in full-length splendour, won critical acclaim when shown at the Royal Society of British Artists in London. Sketches from the 1958 sittings at Buckingham Palace are among the exhibits in this retrospective. The figural and landscape compositions of Boy with Folded Hands, 1953, and an Untitled offering from 1959 complete the exhibition’s survey of works from that decade.

Given that Ben Enwonwu’s practice was informed by his Igbo (aka Ibo) heritage, in particular a historical repertoire of masks and sculptural forms of that culture, the art historical appendage of ‘modernist’ has to be seen within a very specific African frame. This kind of modernism challenges, indeed defies, European definitions of modernism. Rather cheerily it subverts that well-intentioned and somewhat rushed name-calling.

Where the ‘modernism’ as we generally know of it kicks in, though, is in Enwonwu’s steering of post-independence visual aesthetic, not only in a narrow Nigerian context but also in a span inclusive of the wider west Africa. This endeavour towards reinterpretation of tradition is well represented in Anyanwu (Igbo: eye of the sun), a sculpture dated 1975 which celebrates a deity from the Igbo belief system universally revered as the epitome of human perfection. In the years that followed Enwonwu responded to acclaim and produced several versions of the sculpture in different sizes.

The elegant and now well-known Africa Dances series is strongly represented by a piece and serves as a counterpoint to mid- to late 20th century writing that romanticised west African art, craft and tradition. Enwonwu’s work from the series is correctly cited as an impassioned response to Geoffrey Gorer’s 1935 Africa Dances, a seminal text which used the device of a travelogue in the company of a male Parisian ballet dancer of Senegalese origin to lay bare the excesses and transformative violations of colonialism.

Whichever way one interprets the connection between textual narratives at that time and Enwonwu’s visual repartees, this oft-quoted episode or creative phase is especially relevant to Igbo consciousness. Colonialism changed Igbo culture in so many ways that it arguably has never been the same as it was before the Europeans’ arrival. This may also explain why, in this series, Enwonwu tapped into abstraction to give full vent to his thought and technique.

It certainly appears to have presaged a logical progression to interpreting Negritude, particularly noteworthy for an intellectual schooled in anglophone west Africa responding to a black awareness movement rooted in francophone African mainland and Parisian exiles’ responses to French colonialism. A 1980 painting, Negritude, records this phase as well as Enwonu’s earlier, personal journey which may be seen rather beyond the quintessentially Igbo meditations in African Dances.

Ben Enwonwu was born in Umuese-Aroli, Onitisha, on the east bank of the Niger River, in 1917.  After his move to London he studied at Goldsmith College, then Ruskin College, Oxford, and finally the Slade, where he obtained a First. The techniques he absorbed from British schooling, first in Nigeria and then in the UK, can be seen behind his artistic progression, and may well have enabled him to distill influences with a singular outlook. How such linkage is seen by present or future art historians is another conversation.

Although primarily a sculptor and painter, Enwonwu also wrote criticism and taught at Howard University, Washington, DC, and at the University of Ife aka Obafemi Awolowo University (OAU), Ile-Ife, Osun State, Nigeria.

Ben Enwonwu was awarded an MBE (Member of the Order of the British Empire) in 1955 and received the National Order of Merit from the Nigerian government for contributions to art and culture in 1980. He died in Lagos on 5 February 1994.

It was not until the late 1990s and early part of this century that collectors began noticing Ben Enwonwu’s art historical value and commercial worth.

On 22 May 2013 London auctioneer Bonhams capitalised on the rise in Enwonwu’s ‘marketability’ by holding a sale titled ‘Africa Now – Modern & Contemporary African Art,’ an annual event focused that year on the artist’s work. Enwonwu’s art took centrestage at the auction and set a new world record for the artist at GBP 361,250, against his previous best of GBP 125,000. The collection of seven wooden figures holding newspapers, commissioned for a newspaper, originally was estimated to sell for GBP 80,000-120,000.

Enwonwu’s Anyanwu is commonly cited as among the artist’s most accomplished works, not only formally but also in terms of its positioning in Nigerian cultural history. The noble figure, with its lithe bronze torso arising as if from the earth, as Bonhams publicity put it, is considered the pre-eminent expression of what Sylvester Ogbechie describes as “the aspirations of the Nigerian nation and Enwonwu’s personal intercession for its survival and growth.”

Enwonwu’s own words said of the sculpture: “My aim was to symbolize our rising nation. I have tried to combine material, crafts, and traditions, to express a conception that is based on womanhood – woman, the mother and nourisher of man. In our rising nation, I see the forces embodied in womanhood; the beginning, and then, the development and flowering into the fullest stature of a nation – a people! This sculpture is spiritual in conception, rhythmical in movement, and three dimensional in its architectural setting – these qualities are characteristic of the sculpture of my ancestors.”

But the GAFRA show goes a significant way arguing there is/was more to Enwonwu’s art than a well-conceived and expertly executed sculptural piece that clicked into place in history. The conversation has begun, or rather has resumed, after past considerations of this late departed modernist’s life and art and we can expect to hear more, perhaps a lot more. © Sajid Rizvi, 2015.