Cadence of the present imperfect in Khulood Da’mi’s art

Posted on Dec 24, 2013 in ARTISTS, Contemporary and modern art from the Middle East & North Africa

The new Iraqi Cultural Centre in London was the host to a star event this late autumn and early winter. Khulood Da`mi presented a glittering selection of her large and impressive oeuvre, including calligraphy in myriad manifestations in ceramics, cloth and paper in an exhibition very much in the style of a retrospective. Previewed for this article on 30 November 2013, the exhibition ran from 2 to 14 December 2013 but was seen by many of Khulood’s admirers and connoisseurs of her art before the public viewing became available. 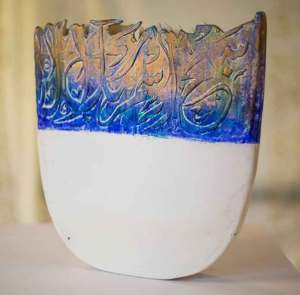 Khulood Daami has garnered an international following since she began exhibiting her work in London in late 20th century. The rhythm and flow of her work has sustained well through this tumultuous period in her native Iraq and its unwelcome resonances outside. It’s a period in which Daami, like many other Iraqis, have had to cope with the treble whammy of the Baathist dictatorship, US-led invasion and sectarian bloodbath. 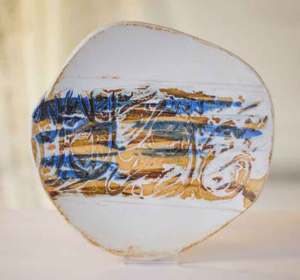 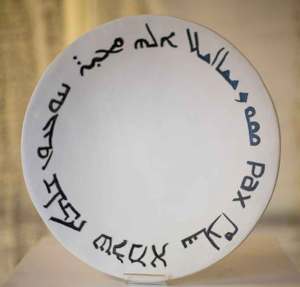 Amidst the discordant and deleterious cacophony of the onslaught on the senses these events represent, Khulood Daami has struggled and managed to remain grounded in a coherent dialogue between her art and everything else around it, and indeed also an ongoing conversation with everyone who’s experienced the voices contained therein and its visual range and diversity.

Her work comes packed with optimism, an enduring faith in Providence and a consistency of technical accomplishment, innovation and skill. This is true as much of Daami’s ceramic pieces as her textiles and works on paper. © Sajid Rizvi 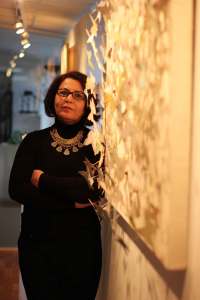