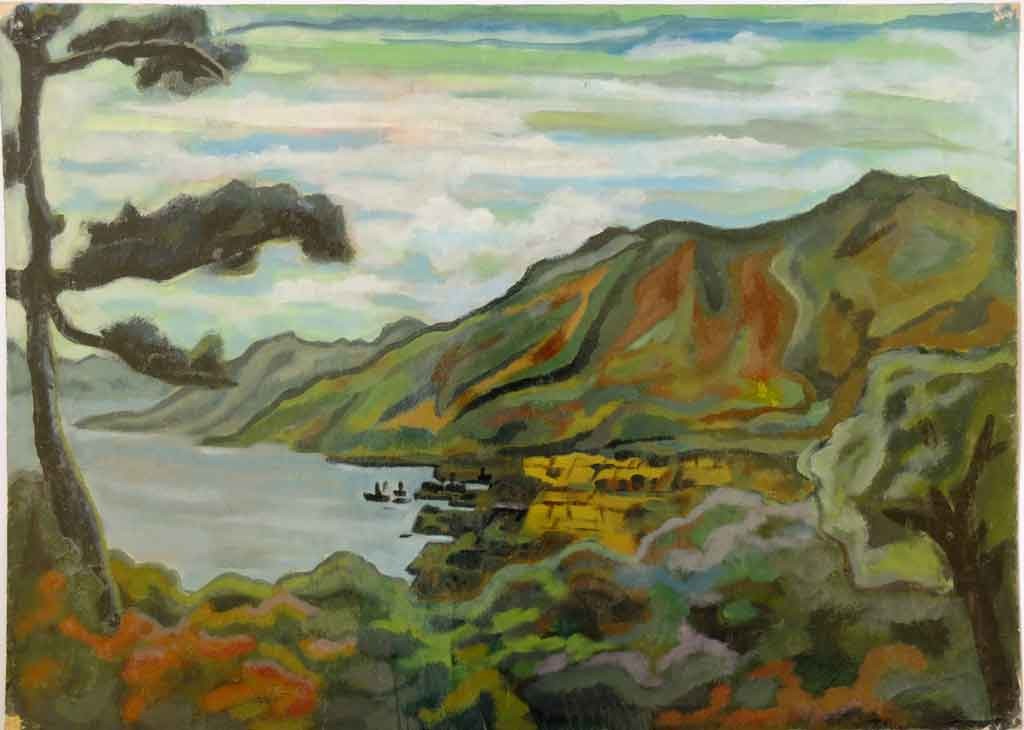 Art made by Japanese school children in the aftermath of the Second World War is a highly appropriate though emotionally charged way to commemorate this year’s anniversary, the 70th, of the US atomic bombing of Hiroshima and Nagasaki, and London’s Daiwa Foundation galleries is doing just that.

Paintings from Hiroshima (5-13 August 2015) brings together art produced by children, including pupils at a girls school that lost 300 children in the bombing of Hiroshima on 6 August 1945.

Of the works on display, 34 were made by students of a Christian girls’ school in Hiroshima who survived the bomb, including the 15-year-old pupil, Yayoi Nose, whose work is featured above. The paintings form part of two collections of the children’s works collected after the devastation wrought by the US attack and now in the possession of British artist Mike Stevenson.  The building of the girls school was destroyed, but the school is said to have been the first to reopen amid the destruction of the city.   The second set of paintings comprises 29 artworks by children from various Japanese schools, collected under UNESCO auspices in the 1950s by Dr Takuo Matsumoto, the principal of Hiroshima Girls School.

“The paintings seems to stand as a very moving testimony to the need we all have to record our responses to the world we live in through the arts,” collector Mike Stevenson says. “They show a concern with things that are simple and familiar to their creators, which has characterised a great deal of art through many centuries and from many cultures.  References to the dreadful experiences through which many of the students must have lived are surprisingly few.”

The age of the Hiroshima Girls’ School’s students  whose works are in the collection varies from six to 17 years, with more than a half of the works painted by 14- to 16-year-olds.

Some of the works were recently  displayed at the Houses of Parliament, Westminster.  This coincided with an event where an atomic bomb survivor from Hiroshima gave an account of her experiences of the bombing to a House of Lords committee.

The Daiwa Foundation said it decided to exhibit the works as a form of commemoration and remembrance of the Second World War and of the atomic bombs in the year of their 70th anniversary.

Mike Stevenson trained at Liverpool College of Art, where he gained the National Diploma in Design in Sculpture and then undertook teacher training at Manchester College of Art. He initially taught in secondary schools and was head of an art department, before moving into primary education, eventually becoming Head of an experimental primary school. He was appointed as Curriculum Development Leader for Visual Arts in Manchester. Stevenson then subsequently worked as an adviser and inspector, responsible for developing art, design and technology education in the schools and colleges of a Local Education Authority.  He ended his career as a General Education Adviser responsible for improving school performance.

‘They told me to paint my story’