Court and Craft: A Masterpiece from Northern Iraq

Home » LISTINGS » Court and Craft: A Masterpiece from Northern Iraq

Court and Craft: A Masterpiece from Northern Iraq at London’s Courtauld Gallery (20 February to 18 May 2014) explores one of the most rare and beautiful objects in the collection of this academic institution, part of the University of London. 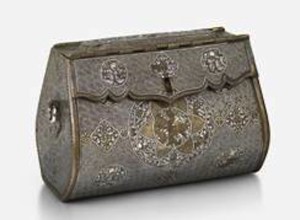 It is a brass bag inlaid with gold and silver, made in Northern Iraq around 1300. Decorated with a courtly scene showing a couple surrounded by their retinue of courtiers as well as musicians, hunters and revellers, it ranks as one of the finest pieces of Islamic inlaid metalwork in existence. A rhyming inscription, composed specifically for the bag, and intricate geometric patterns complete the decoration of this splendid luxury item. No other object of this kind survives. The exhibition will explore the origins, function and imagery of this masterpiece, as well as the cultural context in which it was made.

Acquired by the Victorian collector Thomas Gambier Parry and bequeathed to The Courtauld Gallery by his family, the container was long thought to be a saddlebag for a horseman or even a form of wallet. It is now recognised to have been a lady’s bag and the exhibition will include rare contemporary manuscripts in which similar bags are depicted. The imagery and superb craftsmanship suggest that the object was made for a lady in the courtly circles of the Mongol Il-Khanid dynasty, which was established in west Asia by Chinggis [Genghis] Khan’s grandson Hülegü, also known as Hulagu Khan or Hulegu. Generally believed to have been born 15 October 1218, he reigned from 1256 to 1265 and died 8 February 1265, and in generally believed to have been buried in Shahi Island, Lake Urmia.

The Courtauld bag is likely to have been made in Mosul, which was the centre of the inlaid brass industry and which fell to the Mongols in 1262. Featuring the British Museum’s exceptional Blacas Ewer, which was made in Mosul in 1232, one section of the exhibition will examine this luxury craft tradition before and after the Mongol invasion and will consider how craftsmen adapted their work for their new patrons.

A further highlight of the exhibition, curated by Rachel Ward, formerly of the British Museum, will be a life-size display evoking the court scene on the lid. This will feature objects similar to those depicted there, including a Chinese lacquered table, a silver bowl and spoon, gold earrings, a glass beaker and bottle. These objects testify to the cross-cultural vitality of Mosul and the trade routes opened up by the Il-Khanids. Illustrated manuscripts, including four folios from the famous Diez Album in Berlin (Staatsbibliothek) and a metalwork tray showing an enthroned couple with their courtiers, from the National Museum of Georgia, will provide further insight into courtly life under the Mongols. Images of musicians, hunters and revellers on manuscripts, ceramics and metalwork will resonate powerfully with similar imagery on the bag. The encouragement and patronage of art in Mosul under the Il-Khanids will be further attested to by the inclusion of a celebrated copy of the Qur’an made for the Il-Khanid ruler Öljeitü in 1310 as well as a splendid incense burner made for his son and successor, Sultan Abu Sacid.

Despite being a masterpiece of Islamic metalwork, the Courtauld bag is unknown beyond the scholarly community, and remains little understood even among specialists. Guest-curated by Rachel Ward, formerly of the British Museum, and featuring loans from international collections, this focused exhibition will provide a fascinating framework for the understanding and appreciation of this magnificent work of art.