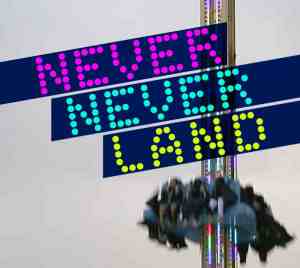 The group show at the gallery, which calls itself EOA.Projects, is to feature the work of Arwa Alneami, Abdullah al Mutairi, Monira Al Qadiri, Foundland, Ahmed Mater and Shaweesh & Neenoism.

The original ‘Neverland’ of the Scottish writer’s work is a fictional place where dwell Peter Pan, Tinker Bell and the Lost Boys among other characters.

Although not all people in ‘Neverland’ cease to age, its best known resident famously refuses to grow up and over the years has become a metaphor for eternal childhood, immortality, even escapism. It was first introduced as “the Never Never Land” in a theatrical production called Peter Pan, or The Boy Who Wouldn’t Grow Up.

In his 1911 novel version Peter and Wendy, Barrie (1860-1937) refers to ‘the Neverland,’ and its many variations including ‘the Neverlands.’ In the earliest drafts of Barrie’s play, the island was called ‘Peter’s Never Never Never Land,’ a name possibly influenced by a contemporary term for outback Australia in those years of European settlement of the Aboriginal native territory.

Most interpretations, though not always positive, see ‘never never land’ as a Utopian dreamland — which opens up endless possibilities for artists.