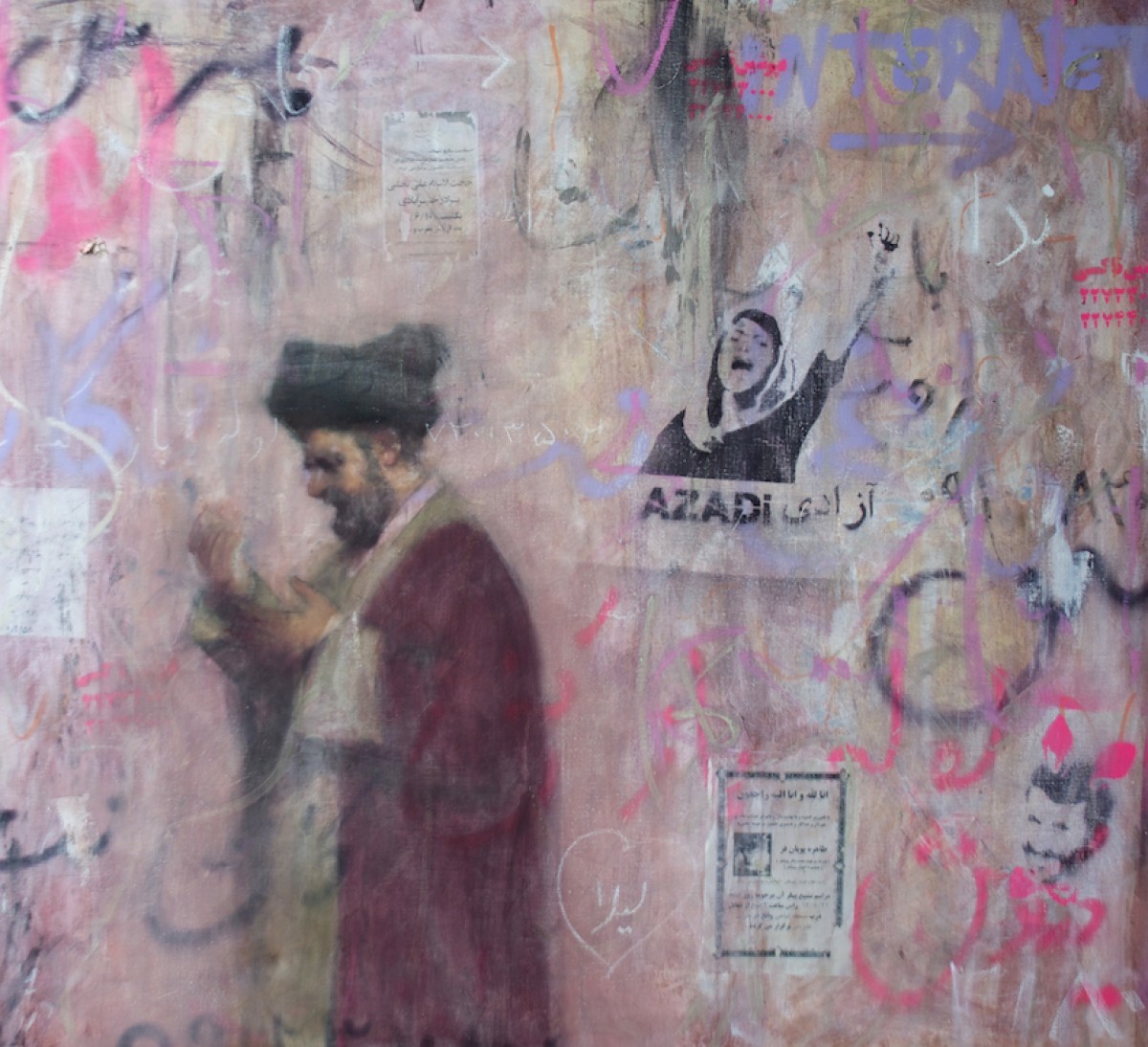 It’s a tightly edited, evocative oeuvre that’s on view at the gallery, a culmination of several years of work informed or influenced by visits to native Iran. Remaindered materials and memories from a fire that gutted Fakhr’s Brighton studio and cost a homeless man seeking warm shelter there his life also figure in the way the paintings have evolved during the period of their making.

Darvish Fakhr was born in Tehran in 1969 and grew up in the United States before moving to Britain. In 1997 he formalised and rounded off his heritage and tradition when he graduated from the Slade School of Fine Art, University of London.

In 2004 he won the BP Travel Award through the National Portrait Gallery, which allowed him to visit Iran, where he exhibits through the Aun Gallery in Tehran.

Darvish Fakhr draws on an an inspirational resource that has caught the attention of generations of writers, artists and international media — the walls of Tehran. Before and after the 1979 revolution that displaced the shah and installed the Islamic Republic, Tehran’s walls were so inseparably linked to events of the period that parts were pared off for conservation and museum displays.

The walls remain expressive as ever and thanks to Tehran Municipality’s lack of cleaning capacity in a burgeoning metropolis of 8 million many of the surfaces retain what’s aptly defined by the artist as palimpsest, the title of the exhibition with a capital P.

Although both Fakhr and historical references point to palimpsest as the reuse of old surfaces of paper, papyrus, parchment or vellum of yesteryears, they are also the stuff of urban graffiti throughout the world. In many contemporary cultures, palimpsest also occurs daily in the practice of school children using takhti (planed and crafted boards) to hone their writing skills before rewashing the surface with liquid limestone for their next task.

In Fakhr’s work the device acquires lyrical, philosophical and poetical properties, thanks largely to his exemplary skill with brush and paint. Smudged figuratives assume photorealistic qualities and often the appearance of stencil or stamp, while retaining their imperfections, a reference to multiple and anonymous interventions and passage of time.

The multilayered and textured paintings double up as signposts of nostalgia, contemporary comment and future promise in the way they present tokens of tragedy, romance, outrage, propaganda and power. Obituary notices, political messages, telephone numbers, declarations of love and longing jostle for position. We know they’ve been assembled by the artist and yet their present concurrence and past relevance in entirely different and divergent contexts seem all too plausible.

These techniques have served Darvish Fakhr well in an impressive body of portraiture, including a nine-portrait representation of Akram Khan (1987–), the British dancer and choreographer of Bangladesh descent, for the National Portrait Gallery’s permanent collection. The portraiture included in Palimpsest is so distinctive that it is identifiable as Darvish Fakhr’s singular work. SR