The first thing to consider about Jamil Naqsh & Najmi Sura: An Epic Romance, the exhibition at London’s Albemarle Gallery (5-28 June 2014) is how long it has taken this joint show to materialise, writes SAJID RIZVI. 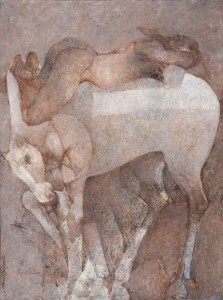 Neither Naqsh nor Sura are spring chicken and while Naqsh has accumulated fame and fortune his lifetime muse Sura has practiced her art virtually in purdah. Previous appearances of her art have occurred more often in international auctions than in grand events celebrating only her work. This show almost reaches that goal, if ever there was one. But, again, it’s glory shared with Naqsh.

As the gallery points out in copious publicity the exhibition celebrates an “intense romantic companionship of four decades,” begun in Karachi, Pakistan, where Naqsh honed his skill amidst notable contemporaries, many of them lately departed, and under the tutelage of Najmi Sura’s family, which included her Burmese grandmother.

If the inevitability of a fateful pull of Najmi Sura’s youthful exotic persona wasn’t writ large enough then, Najmi Sura’s fascination with and interest in the painterly pursuits of the much older Naqsh completed the ingredients of a chemistry that was to infuse both their life and art. 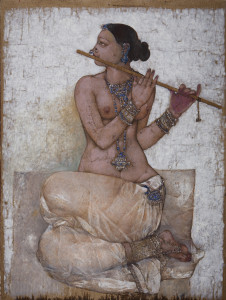 Najmi Sura was born in 1951, the life of Naqsh began in the late 1930s (1937, 1938 or 1939, according to competing ‘official’ accounts) in a conservative but enlightened Muslim family of easy privilege in India. His father presided over a bustling household of a zamindar as an aristocratic owner of many acres of inherited land, a virtual ruler over the lives of farmer families that tended agriculture, fruit orchards and pastures.

The separate independence in 1947 of India and the new entity of Pakistan, both carved out of the British Raj on the subcontinent, shot through aesthetic sensibilities, national and personal identities and individual sense of heritage and history. Most affected by this reconfiguration was the Muslim population of present-day India that migrated to Pakistan. Jamil Naqsh was among those culturally dispossessed, repossessed and reinvented in this manner.

His early work followed a familiar path of a pictorial reinvocation of Mughal grandeur, motifs and icons of a Muslim family used to a comfortable lifestyle, if not always opulence. A traditional enlightened Muslim family, that is, suffused with life inside books in Persian and Urdu and religious texts of the Quran and Hadith, rather than lay existence pulsating in plenty around it. The many minions that milled around feudal households such as that of Naqsh seldom fired up artists of the period, with very few exceptions. Stylized Islamic calligraphy, themes of poetry, romance and Sufi thought from Persian/Mughal literature and paintings remained legitimate starting points for many artists of Muslim as well as non-Muslim descent in those decades before partition of the Raj.

Not unlike many other neo-Mughal painters of the 1940s and 1950s, Naqsh delved in refinements of a courtly culture residing in memory rather than in reality around him. It was good art, accomplished and pleasant to look at, with familiar motifs embellished by the artist’s signature refrains and vignettes of imagery—in the case of Naqsh, horses, pigeons and more pigeons, lifted out of verminous state and ennobled as symbols of love and longing, maybe mutual and familial bonding, or as messengers of secret intent and carriers of whispers consigned to virtual chits of paper, as in Mughal lore.

Not unlike many contemporaries then, Jamil Naqsh embarked on experimentation and exploration of new ways of expression as information about other art elsewhere filtered through books and a mass media well before the internet age.

Through these limited international exchanges at that time, exposure to European and Soviet art, in a pattern shared with artists elsewhere in Asia, opened artists to new possibilities.

It was suddenly acceptable, for instance, to contort and distort the human figure and represent it in works that would have been condemned and dismissed as caricatures or inept art. To some that construed ultimate rebellion, not only from respectful figuration of miniature painting, wherein the beauty of human form could represent prayer and a tribute to divine perfection, but also a depiction in line and colour of harsh human realities of despair, misery and mayhem and the opposite of beauty in a conventional textbook jargon.

The shift away from inks, gouache and watercolours to malleable media was a direct import from Europe and the Soviet Union and its satellite states, whose embassies pursued a vigorous cultural programme of shows and artistic events. The use of canvas and later mixed media gave artists freedoms they seldom enjoyed. In neighbouring India, Iran and Iraq, similar creative upheavals were afoot, with startling results, though in each of those countries artists were less constrained than their contemporaries in Pakistan by religious dogma that came to blight Pakistani painting and led to a splurge of calligraphic art. 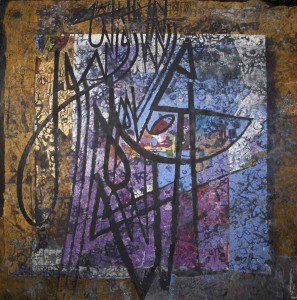 Theories abound about why liberal and secular Pakistani artists, not averse to mundane pleasures in a largely unfettered society of the 1970s, resorted to calligraphy as an art form. A plausible contention is that Arabic/Persian/Urdu calligraphy invites contemplation, is a passport to abstraction and is intrinsically sensual. The arabesques, rotund drums, delicate sweeps and curves and statuesque vowels and consonants of the extended Urdu alphabet provide fertile ground for creative playfulness and, for the religiously minded, a welcome challenge to achieve perfection in appearance and style as a form of devotion and worship. Zoomorphic calligraphy, borrowed from Persian tradition, offers a clever way out of a perceived dilemma for those mindful of contradictory edicts on figurative art. The Kufic Arabic style of calligraphy, believed to have predated Islam, offers the creative mind bent on experimentation enough angularity and jaggedness to compete with cross-influences from cubism and early avant-garde. Jamil Naqsh has experimented with calligraphic forms in numerous works exhibited in London and Dubai, United Arab Emirates. About 100 such calligraphic works are now part of a gift to the Foundation of Museum of Modern Art, Pakistan. Calligraphy for Naqsh is neither a definable phase nor a style preferred over early nudes, poetic modern figurative renditions from classical literary themes. He’s known to switch easily between the abstract and the figurative, with calligraphy playing a part somewhere in between. 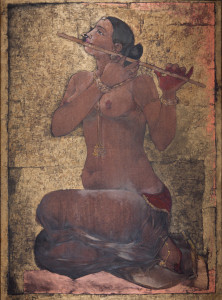 The work of Najmi Sura is worlds apart, her painting over the years emerging as a distinct and recognisable style where the female form is neither fussily fragile nor conventionally sensual. If anything her women are pragmatic, muscular forms with generous attributes that are sexually charged, not delicately proportioned as in both late Mughal and modern South Asian miniature painting. If anything Najmi Sura’s women are the generously formed court ladies and courtesans that appear in earlier miniature paintings in subordinate roles alongside protagonists, such as servant girls to princesses waiting for their love-lorn patrons or suitors.

There’s a nod in her work to stories from South Asia’s Hindu heritage, as in her depiction of Radha (Devanagri: राधा), the older companion or consort of Krishna in the Mahabharata. Radha is by far one of the most coveted modern role models and is rated as a goddess as well as the chosen one among Krishna’s many female devotees. So, there may be something in that.

True to painterly tradition, Najmi Sura’s work also features women in the company of various musical instruments, which indicate Sura’s preference for women in proactive roles rather as objectified or commodified females waiting for favours. Unlike past depictions of this theme. Najmi Sura’s women come across as confident ladies, despite the ambivalence of their place in court or society, either in an imagined yesteryear or in our contemporary age. © Sajid Rizvi 2014.