The subtitle of Lida Sherafatmand’s exhibition at the Roerich Family Museum and Institute, St Petersburg, references an extraordinary citizen of the world, in many ways like Lida herself, in the person of Nikolai Konstantinovich Roerich (Никола́й Константи́нович Ре́рих,  9 October, 1874-13 December, 1947), writes SAJID RIZVI. 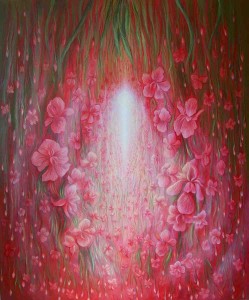 Again, like Lida Sherafatmand, an itinerant artist (in the best sense of that phrase) Roerich demonstrated an awe-inspring and indeed inspiring range and diversity of interests in his personal quest that is yet to be fully researched and documented.

To summarise briefly, Roerich painted and drew, dug for archaeological scrutiny, held forth on ideas and ideologies of civilisations and cultures apart before distilling and arriving at his own world view. He made a living in both law and literature and possibly as an artist as well.

Roerich courted trouble and was often mistaken for more than an idealistic if somewhat naïve busybody with art on his mind, at a time when real spies and international agents trod paths similar to his across the globe. He died in India’s Himachal Pradesh at the age of 73, leaving an impressive legacy in many disciplines.

It’s fitting to invoke Roerich’s memory, albeit too fleetingly, in the context of Lida Sherafatmand’s expanding oeuvre and contemporary events.

Roerich fought for an impossible idea: separation of human knowledge base from war’s inevitable outcome now known as collateral damage. His campaign for protecting artistic, architectural and scientific heritage from the crossfire of conflict led to nice words being written into what became known as the Roerich Pact.

One would like to think the 1935 treaty drew a line in the so-called rules of war, but reality suggests otherwise to this day. It was comprehensively overlooked in the Second World War;  witness the bombing of Dresden and nuking of Hiroshima and Nagasaki. More recent events, the burning of the library of Sarajevo, the looting of museums in Baghdad, Kabul and Cairo, the destruction of Mali’s threadbare cultural heritage point toward a continuing—and evidently conscious—disregard for that hallowed precept Roerich put forth.

There are numerous reasons why preserving what’s been built, created and thought prior to ourselves is important for continuity of our fragile existence on this planet. Most compelling of those reasons relate to people amongst us who want to elaborate on and reinterpret what they’ve experienced, heard or seen and invite us to share the fruits of their endeavours, otherwise known as art.

Art, in all its manifestations, is the outcome of those personal quests undertaken by individuals across cultures, which may explain why all artistic accomplishments are unique—yes, even those copied from others or inspired by whatever preceded art that we experience today.

What brings the work of Roerich and Lida Sherafatmand together in the latter’s exhibition, Internal Worlds, External Relations (31 August-15 September 2013) is the striking choice of vocabularies by individuals from two different epochs.

Roerich’s visual works, mostly paintings, celebrate the external world he encountered as he travelled whilst his words in numerous texts complement that visual experience with his accounts of seeing, feeling, reflecting on life’s many offerings.

Lida Sherafatmand’s earlier work relates both to the period when she made those paintings and what she’s doing now. Her works from the last decade are in a realistic mode that shuns hyperrealism, ie the brushstrokes avoid literal renderings of figures and some can be characterised as narrative art. Many of those paintings introduce the visual equivalent of a commentary made en passant, a nuanced and often subtle intervention that neither detracts from the visual representation nor derails its delivery. It’s when we come to citations of her earliest work among Painters for Peace and a Humanitarian Art Manifesto she issued at the turn of this century that we begin to appreciate the full import of her commitment to a ‘nonkilling paradigm’ in art. These are discussed in some detail in academic works such as Towards a Nonkilling Paradigm (Pim, 2009), and the Peace Review: Journal of Social Justice (The University of San Francisco 2013).

The simplicity of brushwork in some of the earlier paintings by Lida Sherafatmand appears to aim to cut the journey short and come straight to the point. For these are paintings that invariably carry a message reflecting her concerns of the day, with titles such as Children’s hope, Let’s protect our children from war, Racism, Stop Child Labour.

Remarkably, none of those causes have been abandoned, nor indeed any have been satisfied by more recent developments, but Lida Sherafatmand has moved on to the next stage of her striving for change.

That change, as her more recent work in this exhibition suggests, can only come from within ourselves and hopefully bring about a much wider transformation—in community, society, nations. With visual hints of those ideas at work before us, this selection of her most recent work suggests a progression achieved with complex processes of absorption, reinterpretation, synthesis, translation and transconfiguration.