Masterpiece to return with strong show 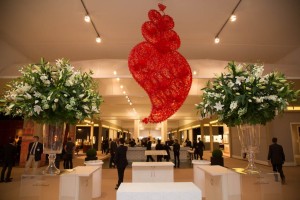 Masterpiece art fair will return to London in June 2014 with a strong list of exhibitors.

The art fair, in association with RBC Wealth Management, announced “its strongest exhibitor line up to date” ahead of its fifth edition 26 June – 2 July 2014 (with a Preview on Wednesday 25 June).

“The 2014 offering of exquisite art, antiques and design from across the world, with over 90 percent of exhibitors returning, cements Masterpiece London’s role as a leading international fair which is pioneering in its advocacy of cross-collecting.”

Graham Southern, director at Blain Southern, said, “Last year marked the gallery’s first appearance at Masterpiece and the fair was undoubtedly a resounding success. What makes this fair so unique is the range of artworks on display, where one might unexpectedly encounter anything from classical to the contemporary, creating an immersive opportunity to experience and learn about art for both the dedicated collector and the viewing public.”

The fair will take place in the South Grounds of The Royal Hospital Chelsea, London SW3.