Mauritshuis to reopen after refit

Mauritshuis, home of Vermeer’s Girl with a Pearl Earring in The Hague, Netherlands, will open 27 June 2014 following a major renovation, writes SAJID RIZVI. 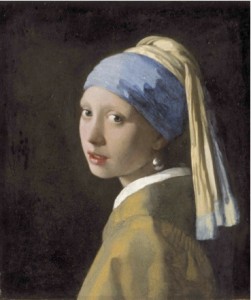 Celebrated both for its architectural beauty and its holdings — most famously the Vermeer masterpiece but also the so-called Royal Cabinet of Paintings, about 800-strong — the 17th century building and the small museum within will reopen after a major rehang and other revisions to the way it has offered its works to public view.

Situated by the lakeside in the heart of The Hague, the museum collection is a definitive repository of Dutch art’s golden age, including Rembrandt’s Anatomy Lesson, Carel Fabritius’ The Goldfinch and Jan Steen’s As the Old Sing, So Pipe the Young. Two other of Johannes Vermeer’s masterpieces are there, View of Delft (c1660 – 1661) and Diana and her Nymphs (c1653-1654).

The museum says its building has been “painstakingly renovated and upgraded to meet the needs of the 21st century visitor.” Many of the building’s original features and colour schemes have been “faithfully restored and renewed,” it adds.

The opening of a new Royal Dutch Shell Wing on the adjacent site, which doubles the museum’s existing floor space and is linked to the historic building by a new light-filled underground foyer, is a highlight of the refit. The new wing provides new exhibition galleries, an education centre, a cafe and other modern visitor facilities.

The Mauritshuis was built for and named after Count Johan Maurits van Nassau-Siegen between 1636 and 1644, when he was the governor of the Bahamas territory under Dutch rule (now the capital of the Commonwealth of the Bahamas). In 1820, the Mauritshuis was bought by the Dutch state to house the Royal Collection of Paintings and opened as a museum in 1822. 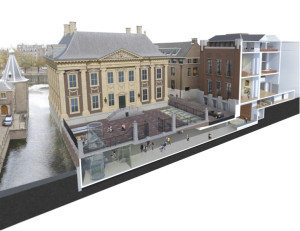 Cross-section of the Mauritshuis showing the new underground foyer which links the historic building to the Royal Dutch Shell Wing opposite. Photo: Hans van Heeswijk Architects.