Home » Contemporary and modern art from the Chinese world and Chinese communities » Meditations on paper: Wang Ai at Hua Gallery

Posted on Jan 21, 2015 in Contemporary and modern art from the Chinese world and Chinese communities, Critical Choice, LISTINGS 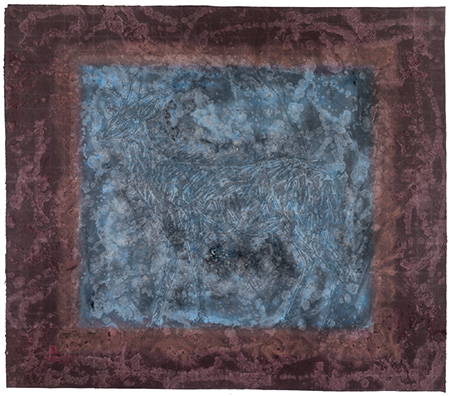 Wang Ai’s works on paper, including craft surfaces based on rice and bark, are travelogues of the mind which invite the viewer to join in. A full appreciation of these meditations on paper represents a veritable challenge in the lively milieu of an opening night and, on a quiet day at a gallery, a demanding exercise when a visitor is assailed by competing visions of art and all that surrounds it.

The artist, poet and fiction writer has won a following elsewhere in Europe and Asia and within China, but this is his first individual exhibition in the UK, at London’s Hua Gallery (21 January 2015-21 March 2015).

Wang Ai was born in 1971 and has been painting and writing from his teens. Family influences prefigured his path. Although his previous work has involved the precision drawing of animation, Wang Ai’s current work is abstract with inscriptive interventions that recall remnants of cave paintings and faded texts.

Interpreted somewhat differently, they are also playful riddles cloaked by colour and shade, a coming together of symbols, superstitions and wisdoms of premodern, Buddhist, Confucian, Maoist, post-Maoist and industrialising China. For instance, in a collection that draws on literary, mythological and poetical references embedded in Chinese consciousness — imparted in varying degrees to the world at large by hobbyists or history — Wang Ai gives us his Deer (photo above), a quintessential Buddhist motif but liberally appropriated in other belief systems in East Asia.

The deer of course refers to the Gautama Buddha’s first reported rapport with an audience that, it is said, included a rapt line-up of the gentle ruminants in the Deer Park of Sarnath सारनाथ, Varanasi, India. The subtle shades of blues and browns in the work, however, aren’t Buddhist, but a nod to the understated palette of the literati and other scholarly works native to East Asia. Another work, Mountain on a Car’s Back, is a poetical but nonetheless biting commentary on the juggernaut of change that is both a burden and a blessing for China today.

The paintings on often multilayered surfaces frustrate any attempt to mark them as either eastern or western. If anything they indicate a distillation of many influences over the years of Wang Ai’s artistic development. The abstractions on paper have an accessibility that may hold the key to Wang Ai’s evolving oeuvre and its wider appeal across cultural boundaries that are never far below the surface in the world of contemporary art, its consumption and place in future art history. ©Sajid Rizvi