A new book, Under the Guise of Spring, by Eugene Lane-Spollen, argues for a game-changing message believed to be hidden in Sandro Botticelli’s universally important masterpiece, Primavera, writes SAJID RIZVI. 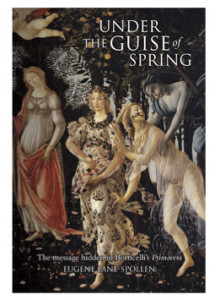 Primavera (detail) on the cover of the forthcoming, Under the guise of spring

Also known as Allegory of Spring, the tempera panel, about two metres tall and a little more than three metres wide, is currently housed in the Uffizi gallery in Florence. The painting generally is believed to have been started and completed during the Italian Renaissance, between the period 1477-1482. Primavera/Allegory of Spring has fired up thousands of artists and people of letters across the world, irrespective of colour or creed or personal prejudices, since it began receiving attention. The painting itself carries no title and most histories of the painting agree that it was first called La Primavera by the artist and art historian Giorgio Vasari, who saw it at Villa Castello, in the hills northwest of Florence, in 1550. The villa, with all its numerous art treasures, was the home in the 16th century of Cosimo I de’ Medici (1519-1574), the Grand Duke of Tuscany. Another Botticelli masterpiece, Nascita di Venere (The Birth of Venus), 1486, was also located there and is now in the Uffizi.

Rather like Leonardo da Vinci’s Mona Lisa, the much smaller portrait painting executed around 1503-1517 and currently in the Louvre, Paris, suspicion that there’s something disguised in the Primavera has persisted in the academic and art historical and indeed ecclesiastical worlds. Lane-Spollen’s book argues that a  chance discovery provided him with the key to unlocking the secret of the 500-year-old masterpiece.

That discovery, the author says in the book due out in the summer, has opened “a window onto the cryptic world of the Renaissance pagan revival,” according to the London publisher, Shepheard-Walwyn.

An elite circle of scholars and artists around the Medici, disillusioned with a worldly and corrupted medieval Church, looked for a purer, unadulterated Christianity in the pagan background to their faith. This was a dangerous occupation, risking the ire of the Church and prosecution as heretics, as a publisher’s note points out.

In 1460 an ancient manuscript, said to be from the time of Moses, was brought to Cosimo de’Medici (1389-1464), the first of the de factor rulers of Florence. Its author had been revered among the early Church Fathers as a gentile prophet of Christianity. Here was the evidence they were seeking — that Judaism, Christianity and Islam had a common source. Convinced, the Medici circle of philosophers and poets strove to merge Judaism, Islam and Christianity into a single religion in harmony with Platonism.

This ‘new learning’ from the pre-Christian past had no place for the medieval concept of man as a sinner seeking redemption, but accepted him instead as a spark of the divine. As Swiss art historian Jacob Burckhardt noted in Die Kultur der Renaissance in Italien (The Civilization of the Renaissance in Italy, 1860) “it became the breath of life for all the most instructed minds of Europe.” Expressing this newly discovered ‘God-like’ being in art ignited the Renaissance.

To find the clue, Lane-Spollen invites us to look at the right side of the painting, at the gesture of Chloris, the goddess of flowers besides reputedly other things,  and focus on the flower pattern she indicates. The same gesture is used in a contemporary painting by Botticelli of the Virgin and Child,  where the allusion is more explicit.

The richly illustrated book [ISBN 9780856832963] explains the allegory  Botticelli painted to remind its owner of the Medici  circle’s vision for Christianity.

Eugene Lane-Spollen spends his time between  Provence, Ireland, Florence and East Asia. He has  devoted the last eight years to researching the subject.

Content Outlines: How the Discovery Came About, Interpretations, A Very Private Location, The Medici – Violent Politics and Sublime Aspirations, Botticelli – Painter and Mystagogue, Classical Rebirth, First Encounter, A Madonna called Venus, The Esoteric Graces, A Medici as Mercury, Changing Natures, Cupid and the Bride, Flowery Language for a New Alliance, Appendices: Location and Dating, Poetry to Inspire a Painter, An Important Letter.