Posted on Nov 26, 2008 in ARTISTS, Contemporary and modern art from the Korean world 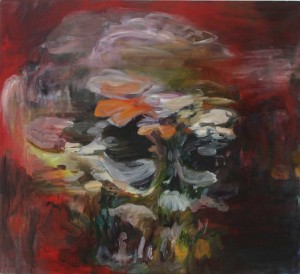 Eemyun Kang’s wide and swirling brushstrokes in Skull, apparently subtitled or read as a hyphenated title, Skull-Fungal land, or Fungal Land Skull, invoke and invite the viewer to her mythical land of Fungal Land, an amorphous and no doubt mysterious territory as much of the imagination as potentially of a yet undefined real world, writes SAJID RIZVI.

As Kang indicates in her statement (below), this work is exploratory — but not tentative — at different levels and touches upon not only Korean traditions but also cross-cultural phenomena such as metamorphosis, its various cultural, religious and spiritual dimensions and by extension perhaps, mysticism or its various spiritual manifestations. In both East Asian shamanistic and early religious practices and Middle Eastern tradition, metamorphosis takes different forms and commands or demands varying definitions, some conjectural, others rooted in social history and practice. The skull itself, of course, becomes an instrument of the artist’s dialogue with the viewer, a metaphor in her vocabulary.

It is perhaps clear here what Eemyun Kang is after: the mind in hot pursuit of definitions for all that it experiences and, on a wider scale, a macro as well as micro peep into the business of worldly and other worldly existence.

In Skull Eemyun Kang sets a challenging task for herself, bringing depth of mystery, movement and suggestion together in an image that is at once bursting with ferocious energy and beckoning the viewer to its concealed islets of calm and contemplation. In this configuration, the apparently anarchic moment accentuates what it presages and captures — a metamorphosis or a transformation. Of the body? Of the soul? Of the body into brushwork on the canvas? The possibilities can be virtually endless. Eemyun Kang has put much thought into her work and invites the viewer to do the same. The result is intellectually seductive. — SR

I am interested in myth, metaphor and metamorphosis. These themes are strongly linked together. In mysticism, often transformation takes place and also things exist metaphorically. In painting practice, the movement of body into brushstrokes on the canvas can be seen as metamorphosis and transformation itself since the body transforms into painting through the act of painting. The ‘Metamorphosis’ that I try to capture is not the transformation before or after, but the moment of the metamorphosis. My fascination in mark-making plays throughout my paintings and I am very interested in how these brush-marks can represent, resemble or be perceived in various ways.

In Fungal land-Skull, brushstrokes transform into the imaginary landscape called ‘Fungal land’ and metamorphose once again into a Skull. The forms of brushstroke changes through layers of different colours and lines, and during the period of conflict and chaos, the shapes are metaphorically realigned to more familiar shapes. The mysterious and symbolic skull has been used as an artistic inspiration and it creates a veiled story of the mystic landscape.

• 2007 What Can Desert Island Do? Seventeen Gallery , London