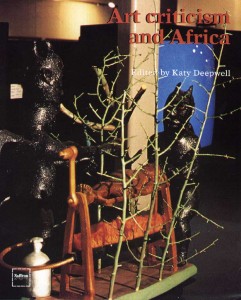 Published in conjunction with the International Association of Art Critics (AICA), the book is focused on contemporary art and art criticism in Zimbabwe, South Africa, Nigeria and Egypt.

The essays in the book shed light on many institutional and administrative issues in contemporary culture: highlighting the role of public and private galleries, art magazines, the press, art schools, groups of artists and critics and the work of government. This ground-breaking work has received wide acclaim from critics and educators.

The contributors include, aside from Katy Deepwell who has written the introduction, Olabisi Silva on africa95: Cultural colonialism or cultural celebration?; John Picton on the wider picture in an essay titled, Yesterday’s cold mashed potatoes; Everlyn Nicodemus on The art critic as advocate; Ola Oloidi on art criticism in Nigeria in the period from 1920 to 1996; Murray McCartney on the role of the art critic in Zimbabwe; Barbara Murray on the evolution of the Gallery magazine in Zimbabwe; Tony Mhonda on the role the art critic as an advocate of art; David Koloane on the purpose of art criticism; Colin Richards on art criticism in South Africa; Chika Okeke on art criticism of accommodation; Fatma Ismail Afifi on the Kom Ghorab project in Cairo; Olu Oguibe on the new millennium and George Shire’s response to his essay. Buy this book

Ola Oloidi | Art criticism in Nigeria, 1920-1996: the development of professionalism in the media and the academy

Murray McCartney | The art critic as advocate: a Zimbabwean perspective

Barbara Murray | Art criticism for whom? The experience of the Gallery magazine in Zimbabwe

David Koloane | Art criticism for whom?

Chika Okeke | Beyond either/or: Towards an art criticism of accommodation

George Shire | Art criticism of Africa outside of Africa: A reply to Olu Oguibe

Africa in Britain, Britain in Africa and Beyond: Sajid Rizvi