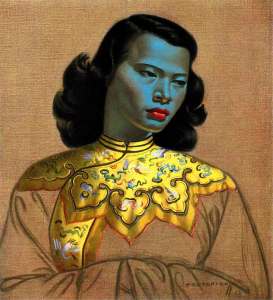 Chinese Girl, the most iconic work of Vladimir Tretchikoff, a Russian émigré who settled in South Africa, set new records as it sold 20 Mar 2013 during the South African sale at Bonhams, London.

The buyer of Chinese Girl was identified as Laurence Graff, British businessman and jeweller and chairman of Graff Diamonds International, who owns the Delaire Graff Estate near Stellenbosch, where this picture will go on public display with the rest of his art collection.

Often said to be the most widely reproduced and recognizable picture in the world, reportedly more than Leonardo da Vinci’s Mona Lisa, from the 1950s prints of this work sold widely in South Africa, Britain, Europe and America.

Bonhams said Tretchikoff’s value has risen exponentially in the art market, due to both the re- evaluation of his legacy in exhibitions such as Tretchikoff: The People’s Painter, at IZIKO South African National Gallery (2011), and his appearance on the world stage at auction at Bonhams. A new world record was recently achieved at Bonhams with the semi-nude portrait painting, Portrait of Lenka (Red Jacket), featuring Tretchikoff’s lover and muse
Leonora Schmidt-Salomonson (1913-2013), which sold for GBP 337,250. Just over 100 Tretchikoff works have appeared at auction, a twenty-year trajectory which charts a remarkable resurgence in the artist’s popularity.