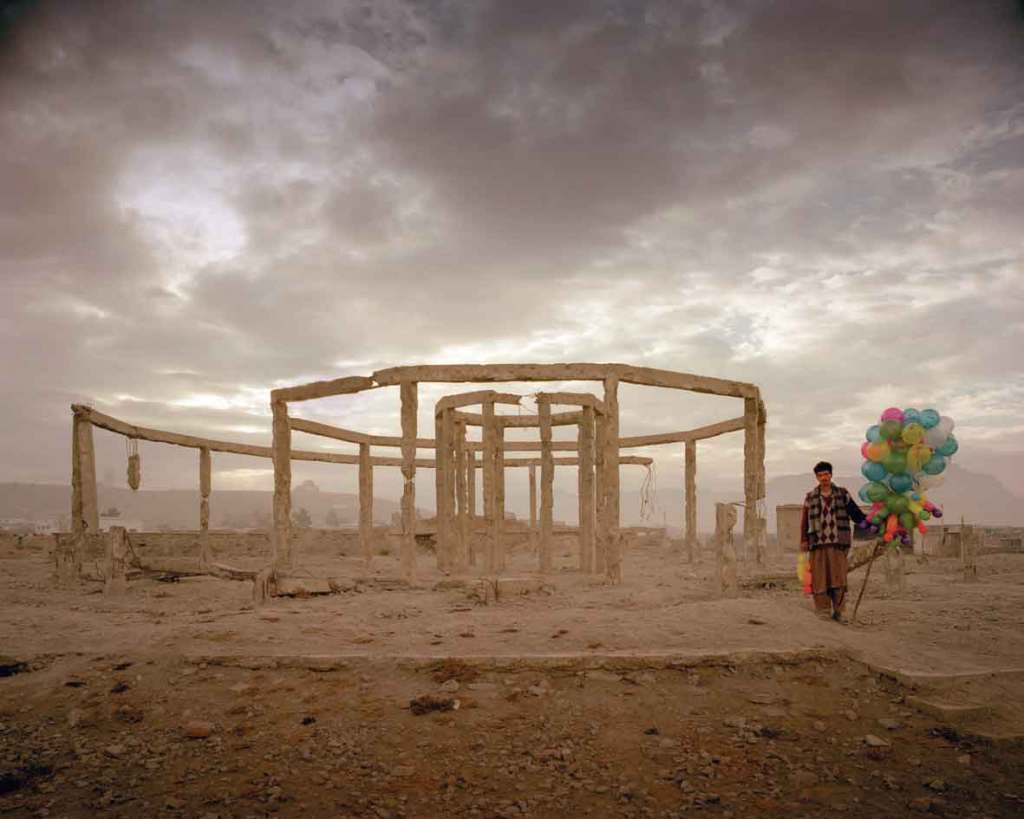 Norfolk 2001: Man with balloons. Former teahouse in a park next to the Afghan Exhibition of Economic and Social Achievements in the Shah Shahid district of Kabul. Ballons were illegal under the Taliban, but now balloon-sellers are common on the streets of Kabul providing cheap treats for children

Winner of the European Publishers Award for 2002, Afghanistan: Chronotopia (7 September-19 October 2002), an exhibition of photographs by Simon Norfolk at Open Eye Gallery, Liverpool, is a stunning exploration of the archaeology of the modern Afghan landscape and the after affects of more than twenty years of conflict.

Drawing a parallel with Heinrich Schliemann’s discovery of the ancient city of Troy, in which he found 9 cities deposited upon each other, each one in turn rebuilt upon the rubble of its predecessor and later destroyed, Norfolk presents a country ravaged by 24 years of destructive conflict.  From the Soviet invasion of the 1980s to the internal fighting of the Mujaheddin that followed their withdrawal; through the rise and rule of the Taliban in the 1990’s to America’s current ‘war on terrorism’; the Afghanistan we see here is one that has been reduced to an almost Biblical wasteland; a museum of the archaeology of modern conflict.

Simon Norfolk’s editorial work has appeared worldwide and is held in the collections of the British Council, the Houston Museum of Fine Arts, the Portland Museum, Oregon and the Weismann Art Museum, Minneapolis.  A hardback book, Afghanistan: Chronotopia published by Dewi Lewis Publishing accompanies this exhibition.

Norfolk said of his work in Afghanistan, ‘These landscapes are how my childish imagination pictured the Apocalypse or Armageddon; utter destruction on a massive, Babylonian scale, bathed in the crystal light of a desert sunrise.’