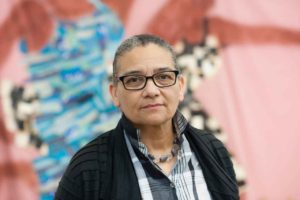 The 2017 Turner Prize has gone to Lubaina Himid, at 63 reportedly the oldest artist to win the honour and the GBP 25,000 that comes with it.

Himid’s resiliently uncompromising and witty approach to some of her artistic concerns, not least of those being the resurgence of aggressive nationalism in Europe and beyond, have widened her following over the years.

The award of the prize comes in a week when United States government policies, in a telling contrast, threaten to deliver yet another blow to art and humanities as US museums face losing tens of millions of visitors from their international audiences affected by travel bans.

The jury’s choice of Lubaina Himid was announced at a ceremony in Hull Minster, in partnership with Tate and Hull UK City of Culture 2017. This year the Turner Prize is being held at the Ferens Art Gallery in Hull as a highlight of its City of Culture year, itself at risk of falling victim to Brexit.

The GBP 25,000 prize was presented by DJ, producer and artist Goldie during a live broadcast on the BBC. A further GBP 5,000 is awarded to each of the other shortlisted artists.

The jury awarded the prize to Lubaina Himid for a trio of outstanding shows in Oxford, Bristol and Nottingham. They praised the artist for her uncompromising tackling of issues including colonial history and racism.

The jury admired her expansive and exuberant approach to painting which combines satire and a sense of theatre. The prize acknowledges Lubaina Himid’s role as an influential curator and educator who continues to speak urgently to the moment.

Lubaina Himid was born in 1954 in Zanzibar, Tanzania. She studied theatre design at Wimbledon College of Art and an MA in cultural history at the Royal College of Art. She is professor of contemporary art at the University of Central Lancashire.