Posted on Dec 16, 2017 in ARTISTS, Contemporary and modern art from the Chinese world and Chinese communities, Critical Choice, NEWS 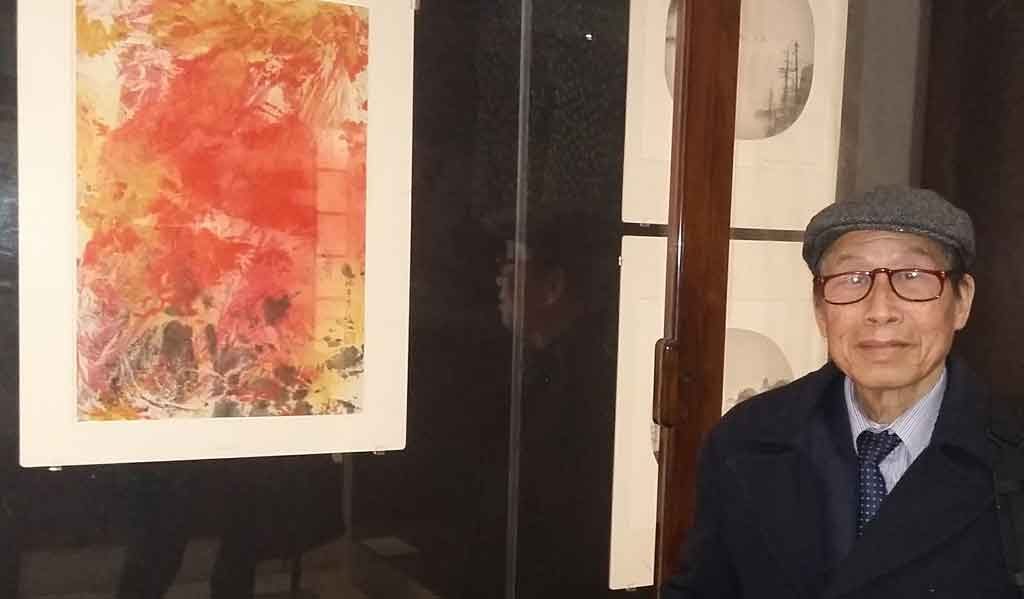 Hai Shuet Yeung, MBE, in front of his abstract painting at the British Museum. Photo: AFIS/sr

British Chinese artist Hai Shuet Yeung MBE is showcased in the British Museum’s premier Chinese gallery as a result of a recent refurbishment that brought contemporary and modern art into what used to be a largely historical display. 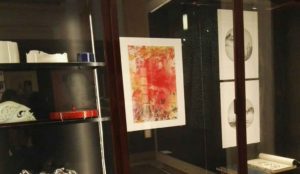 Yeung, also known as Yáng Xīxuě (a literal pinyin transliteration of the three characters 杨希雪), received further recognition of his innovative abstract painting style in a publication accompanying the gallery refit, China: A History in Objects, by museum curator Jessica Harrison-Hall, recently published by Thames & Hudson in conjunction with The British Museum.

In 1997, the museum bought two of Yeung’s abstract works — distinctly unsketched free flowing abstractions on rice paper. In a style that Yeung has taken into new directions since those museum acquisitions two decades ago, the paintings demonstrate his deft deployment of inks and colours without any resort to direct brushwork on the main body of the paintings. Instead, in these and numerous other works on paper using inks and other media, Yeung demonstrates that he can use ‘crumpled paper’ often in lieu of brushwork or in the style of textile tie-dyeing, or sometimes bring in playful bursts of a spraycan, with astounding results.

In more recent painterly explorations, Hai Shuet Yeung has gone into oils, mostly on paper, but points out that comparisons with Jackson Pollock (1912 – 1956) are hasty, as his vibrant works benefit from his confident facility with painstaking technique and media, his singularly vibrant palette, his macro-micro argument and poetical narratives and that they invite scrutiny for deeper truths that go beyond abstract expressionism. These new works, however, may not yet find their way into the British Museum anytime soon for a variety of reasons, not least perhaps because they are oils on paper, not water colours.

The purchase of the art works two decades to this year coincided with the publication of Hai Shuet Yeung: Innovation in Abstraction, by Sajid Rizvi with contributions by Anne Farrer and Lee Gongming in hardcover and softcover editions. More information on this book appears here.

Interviewed for the volume, Hai Shuet Yeung outlined his ideas behind his bold and calculated departures from traditional Chinese painting methods, the use of what he called his ‘crumpled paper’ technique, and the interaction between the ‘macro’ and ‘micro’ views of the abstract in landscape art.

He has said abstraction is a universal truth; it is our way of seeing that creates non-existent distinctions. Abstraction, he reminds us, resides in whatever surrounds us. He’s fond of saying, convincingly and with demonstrable vigour, that his paintings can be cut up to any size and yet maintain their artistic integrity. He expands on these themes via his new online presence, www.noboundariesart.co.uk, and when he exhibits or talks about monumental new projects.

Since 1969, Hai Shuet Yeung has lived and worked in Grimsby, northern England, and was awarded an MBE for his contribution to community and society. ©Sajid Rizvi

The new British Museum book, China: A History in Objects, is reviewed elsewhere in Eastern Art Report and other EAPGROUP journals.