Posted on Dec 21, 2013 in ARTISTS, Contemporary and modern art from the Korean world, People 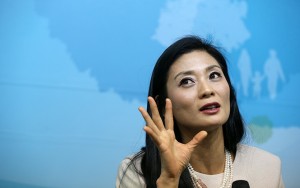 At a press conference in Seoul on December 18, 2013, Kang said that she had received the same proposal a few times in the past, but that she didn’t think she was ready at that time, which makes her acceptance this time somewhat of a surprise. Kang says that her decision is because of her “sixth sense” which told her that it was “now or never.” Comparing it to the feeling when choosing a spouse, she said, “I questioned myself repeatedly, but it was a good decision,” adding that her decision is also owing to the strong support of her husband.

“Compared with the past, Korean ballet has made unbelievable, incredible progress,” said Kang, praising the quality of Korean ballet. With her experience performing on world-class stages, Kang said she will help all the dancers develop their talents since, “The Korean National Ballet represents Korea and the Korean people.” When asked about her future plans as artistic director, she said that she needs more time. Kang said she has many ideas to help the Korean National Ballet company improve itself and will lead the company step by step so that all the dancers can fully display their talents. “The most important thing is team work. I want to encourage the dancers at the back so that each of them can shine on stage. That is my job,” said Kang.

In Korea, Kang is known not only as a world-famous ballerina but also as an icon of inspiration for many people. In 2001, a photo of someone’s ballet-abused feet created a big sensation in the media. The feet were covered with calluses and had large, ungainly toe joints. When the ugly feet photo was shown on TV, audiences were shocked, but deeply respectful, of the amount of effort and pain required. As it turns out, they were Kang’s feet.

After beginning to learn ballet at the age of 12, a relatively late age for a ballerina, Kang left Korea to study at the Académie de Danse Classique in Monte Carlo, Monaco. Though unable to communicate with her class mates in French, she snuck away to an empty studio late at night for secret solo training under the moonlight. In 1985 she won the Prix de Lausanne, one of the top four ballet competitions in the world. At the age of 18, Kang joined the Stuttgart Ballet as its youngest dancer. After being an unknown member of the dance troupe for ten years, Kang slowly yet steadily made progress on the stage to become first a second soloist, then a first soloist and finally a principal dancer. She didn’t give up, even when she once got a fracture in her shinbone or even had metal pins inserted into her broken leg. In 1999 Kang received the Best Female Ballerina Award at the Prix Benois de la Danse, often referred to as the “ballet Oscars.” In 2007 she received the German title “Kammertänzerin,” or Royal Court Dancer, the highest honor a dancer can receive in the country.

In her 2013 autobiography, “I Do Not Wait for Tomorrow” (unofficial translation), Kang describes herself as, “the oldest, 46-year-old ballerina still in active service.” “If you want absolute success, you need to have passion. If you want to raise your limits and live the best life possible, you must put some real effort into it,” wrote Kang in her book, emphasizing the importance of endless effort and passion.

At the press conference, she said that, even that day, she had her daily stretching at 1 a.m. earlier in the morning. “You don’t need a certain time or place to train. I train and stretch even at the back of the train. I grit my teeth when training day in and day out. If you want to do something, you need to do it more,” said Kang. She expressed her will to create such an atmosphere at the Korean National Ballet.

Kang will begin her three-year stint as artistic director at the Korean National Ballet in February 2014. Except for her pre-scheduled performances with the Stuttgart Ballet– “Madame Butterfly” in July 2014, “Onegin” in November 2015 and, finally, her retirement performance in February 2016– all her time will be devoted to her new career at the Korean National Ballet. 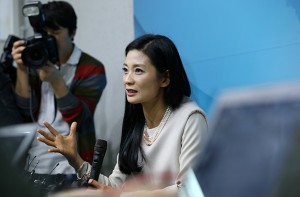 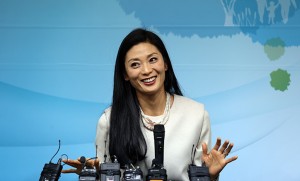 Korea.net asked the following questions to Kang at the press conference.

Q: What would you like to do most during your three-year term as artistic director, outside of being a principal dancer?
A: My wish is to give all the dancers wings so that each of them can fully shine. I will spend the first year of my term getting to know them in order to make a good team and a family-like atmosphere. Dancers can only fully display their capabilities in such a comfortable environment.

Q: In Korea, ballet is still considered to be exclusively for the upper class. What do you think you need to do to make ballet more accessible?
A: That concept doesn’t only apply to Korea. Anywhere you go in the world there are always a few people who live in poverty and hunger and do not go to see the ballet. But I will make an effort and hold discussions with the national ballet staff in order to help bring ballet closer to the general public, particularly with more affordable ticket prices. If this is successful, I hope ballet will become as popular as soccer.

Q: To the audience, you always look elegant and gorgeous, but people know you made tremendous sacrifices behind the curtain that you can’t even describe in words. What would you like to say to younger ballerinas?
A: All ballerinas, both those who work on the international stage and our Korean National Ballet dancers, are really doing an excellent job, but in my eyes, I can see how I can help them make further progress. Every performance involves mistakes and difficulties. I know how much effort they make and how hard they train, so I highly value their endeavor, their tears and their sweat. For this reason, I hope to lead the Korean National Ballet so that every dancer’s capabilities can fully shine.