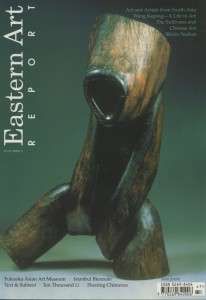 • The Sullivans and Chinese Art by Sajid Rizvi

• A Life in Art—Wang Keping in Conversation by Sajid Rizvi —Now based in Paris, Wang Keping was one of the rebellious members of the Stars group that challenged Beijing’s authority in the late 1970s. He refused to compromise even after his move to Europe and is credited with creating some of the most original work in wood. In this conversation Wang Keping speaks about his work and counters questions on ‘influences’

• Pakistan: Another Vision, Another Colonial View? by John Holt

• Floating Chimeras —Report on a recent exhibition at Edsvik Art and Culture, Sweden

• Ambivalence and Iranian Identity—The Work of Shirin Neshat by Carly Butler —The visual image of the Iranian chador (veil) is so strong that many in the West believe its meaning to be obvious, thereby negating the need to listen to Iranian women and search for other interpretations through women’s own literature and poetry. One woman attempting to bridge these gaps between interpretation and understanding through film, photography and video is the Iranian-born artist Shirin Neshat

• Representing Asia or Asias—Fukuoka’s Asian Art Museum by Noriko Ishimatsu —Interview on the pioneering museum in Japan, and the background to its establishment in a country that remains largely beholden to contemporary art from an international arena that is not necessarily inclusive of Asia

• Index to Back Issues