‘Entry prohibited…’ features artists of The Other

Home » ARTISTS » ‘Entry prohibited…’ features artists of The Other 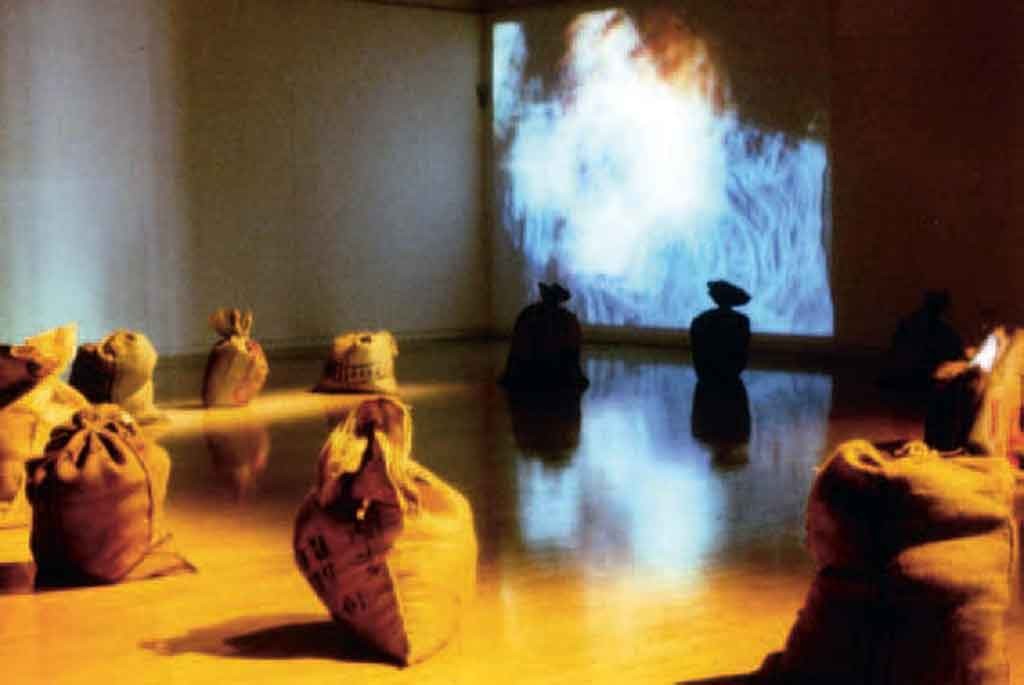 Europe’s current struggles with its past, present and unknowable future are brought together in what appears to be a trenchant exhibition in a town previously notorious for its unwelcoming stance, albeit as part of the Cold War, and more recently noted for a  widening embrace for ‘new Europeans’ from Africa, Asia and elsewhere, writes Sajid Rizvi.

ENTRY PROHIBITED TO FOREIGNERS, yes, all in capital letters, features the work of 11 artists who deal with issues of The Other and connected threads in Europe or the West with varying degrees of intensity but in diverse media. The exhibition title recalls an infamous greeting reserved for outsiders and apparently designed to keep suspected Soviet agents out of the area.

Uganda-born British artist Said Adrus traces his ancestry back to India; Gothenburg-born Loulou Cherinet represents Ethiopia and Sweden; Julien Creuzet is French but originally from Martinique in the Lower Antilles, Caribbean, a European Union constituent as part of France despite the vast distance (not quite like Australia or Israel in Eurovision Song Contest but constitutionally legit and redolent of that anomaly).

Love Enqvist works between London and Sweden; Tamrat Gezahegne is still Ethiopian, ie not yet hyphenated, and the same applies to Ahmad Ghossein, who works in Lebanon. Katia Kameli describes herself as Algerian-French; Jackie Karuti works in Kenya; Mario Macilau in Maputo, Mozambique and Emanuel Tegene in native Ethiopia. South African Breeze Yoko works in Johannesburg.

The site-based premise behind ENTRY PROHIBITED… is that Boden, once a forbidding northern outpost of NATO’s confrontation with the Soviet Union, is now anything but. It’s host to migrants who didn’t perish in the Mediterranean Sea or on perilous journeys from elsewhere to European destinations.

As a nation that participated, albeit briefly, in the CIA’s rendition for torture programme, Sweden isn’t short of wounds to heal.

Neither is it anywhere near the cyclical discourse on multiculturalism that Britain has chewed, spat out and now, driven by self-interest amid youth radicalisation for ideology-driven murderous causes, appears to be regurgitating in parts.

Unlike Britain, Sweden or rather some sections of it oscillate between extremes of intolerance and unconditional love of alien arrivals. An exhibition of such diversity and provocative—OK, thought-provoking—content therefore adds considerable value to the fraught narratives astride Sweden’s volatile social milieu.

Havremagasinet, the large exhibition venue previously used to store grain to feed troops stationed there, is an up and coming art centre with several international art exhibitions to its credit.

“When I was invited by Havremagasinet to do this exhibition I wanted to start from the context of the city,” says curator Elise Atangana.  “I saw the complex history that Boden has had and how closely connected the town is with today’s migration. Today the city is widely open and it hosts many refugees from North Africa and the Middle East. The small isolated town is also part of a whole. Its identity is changing, and becomes another through others. This was the theme I wanted to work with in this exhibition.”

The work of the 11 invited artists “addresses the theme of mobility: how it transforms our way of life, its impact on our daily lives; how this mobility feeds our dreams and imagination of an entire society,” says a curatorial statement. “The works deal with displacement in space, in time, in itself and others’ representation. They are interested in the flow of ideas and migration of [people], how they meet, how they connect, how they interact.”

Said Adrus combines his digital media work with materials such as jute, cotton, hessian or wood that reference his journey from African and Asian shores to the western hemisphere—migration and emigration in the present context. In his video installations Adrus delicately and deftly highlights the cultural and religious similarities as well as differences in order to question them.

Loulou Cherinet, born in Gothenburg, Sweden, studied art at the Addis Ababa University School of Fine Art and Design in Ethiopia and the Royal Institute of Art in Stockholm. In her painterly and film work, Cherinet shares and provides the viewer with a critical and questioning look on the society that surrounds and undeniably shapes her.

Julien Creuzet, born a Frenchman in Martinique, explores identity issues specific to the Caribbean, as an inheritor of a fragmented geography that has “profoundly branded him and is now influencing his work.”

Love Enqvist, born in Sweden and dividing time between London and Stockholm, explores the process of living with one another and the conditions it requires.

Ethiopian Tamrat Gezahegne has work focused on the people of the Omo Valley, Ethiopia. Unlike an anthropologist, he’s drawn not to the people as a whole but to the individual within the group, the bearer of the cultural identity of the latter. Inspired by the notion of the individual belonging to the indigenous group, himself owned by an ecosystem on which he is dependent, Gezahegne produces paintings, drawings and performance.

Lebanese Ahmad Ghossein, filmmaker and video artist, has won international acclaim for works including Operation N… (?2004) and My father is still a communist (2011).

Kenyan Jackie Karuti, who works at the Kuona Trust Art Centre in Nairobi, produces works that are inspired by the problematics of identity and gender that affect her as an African woman artist living in Kenya. Rather than identify herself as  “a Kenyan artist” Karuti prefers to be considered as “an artist from Kenya”, shunning everyday notions of Africanness or tradition-bound art or cultural identity.

Ethiopian Emanuel Tegene, who resided for a time in Israel, only to return home to pursue his artistic practice, is driven by his own personal history as well as by the history that binds Ethiopia and Israel, the social and cultural interaction based on the geographical location and psychological barriers.

South African Breeze Yoko, a multidisciplinary artist specialising in video, film and graffiti, recently painted in more than 13 countries as part of the Invisible Borders Road Trip project, travelling overland from Lagos to Amsterdam. “Breeze’s whimsical yet powerful murals unfurl a kind of humanity and beauty that reimagine their
environments,” says a description for the group exhibition.