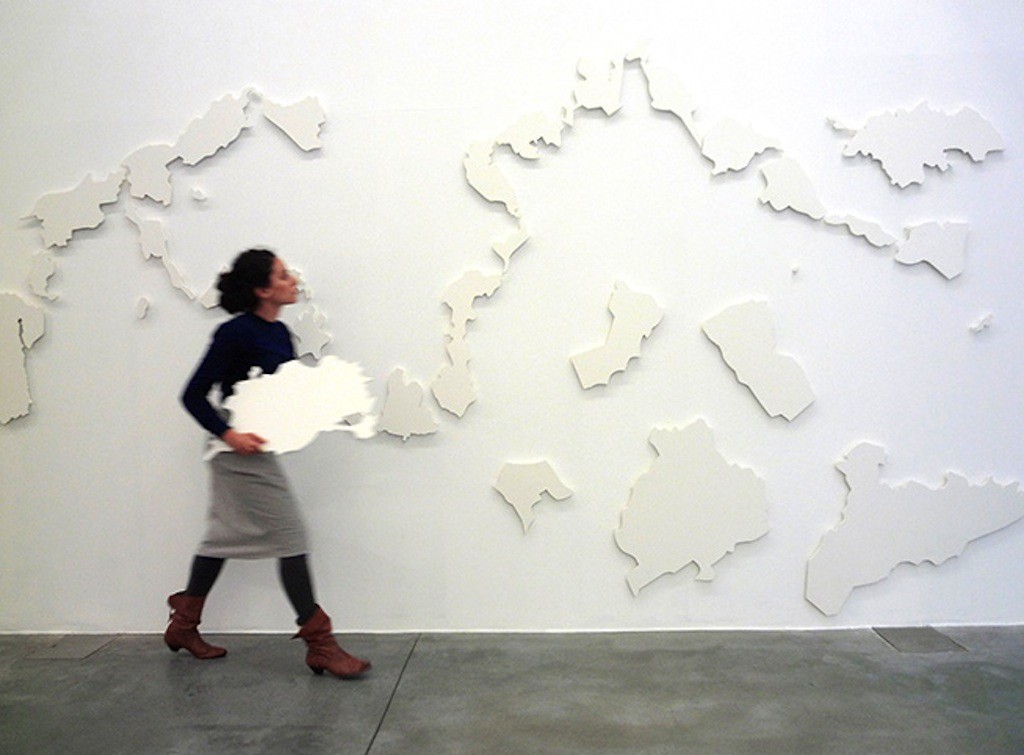 Four MENA artists represented by Edge of Arabia Projects aka EOA.Projects are among artists from the Middle East and North Africa region that feature at this year’s Armory Show in New York.

The work on display includes Jordanian American Oraib Toukan’s installation, The New-er Middle East, an interactive puzzle which although dated 2007 appears astonishingly resonant of 2015, amidst the current developments in the region. Toukan uses iron sheets and plastic with magnet for this work of variable dimensions.

Oraib Toukan was born in Boston, Mass., and raised in Amman, Jordan, and has been working across media in photography, video, text and installation, often using politics and current affairs as source material. In her work so far, the representations of political and other events are de-contextualized into political spaces of institutional critique. Typically her works start off from appropriating a singular map, letter, document, photograph or found footage.  As Iniva’s introduction to the artist points out, stylistically Toukan has become known for her playful subtle interventions with institutions ranging from Wikipedia to Christie’s. With a background in photography she holds an interdisciplinary Masters in Fine Arts from Bard College in New York, as well as an MSc and BSc in Information Systems and Environmental Geography from the London School of Economics.

Toukan has worked with Makan Amman, Triangle Arts Trust, and the Fondazione Michel Angelo Pistoletto in pushing studio practice in to more discursive and social spaces and has co-initiated the annual Shatana International Artists workshop in Jordan. Toukan has also initiated and managed experimental sound art labs for young people in Jordan as well as the first international conference introducing Open Source systems in Amman, Jordan in 2003.

In 2008 she received a full two-year Fellowship Award from Jacob Javitz, as well as MAWRED, YATF and AFAC production grants for work on trying nations for food theft, auctioning off nation states, and researching diplomatic gifts from Arab states to the people of Israel.

Her work has been showcased at the Equity is in the Circle at the 11th Istanbul Biennial, Talking Heads at the Museum of Contemporary Art, Dublin and Counting Memories at Darat Al Funun, Amman.

Palestinian artist and architect Yazan Khalili works mainly out of the West Bank but has been studying fine arts at the Rietveld Academy in Amsterdam “to further develop my skills as an artist.”

Khalili’s statement at the Lutfia Rabbani Foundation website goes on, “Although I have been producing artworks for years before this course without any formal training, I found recently that in order to continue to advance, I needed the opportunity to not only learn the finer points of my trade, but also to be in an experimental, constantly creative environment. Working with others, gaining input and giving it where necessary and being able to learn theory alongside its practical applications is the environment I need to continue to improve.

“In my work I use photography and the written word, unpacking historically constructed landscapes. Borrowing from cinematic language, images become frames where the spectator embodies the progression of time and narratives. I wove together parallel stories over the years, forming both questions and paradoxes concerning scenery and the act of gazing, all of which are refracted through the prism of intimate politics and alienating poetics. In particular, I focus on the effect of geographical distance on our rendering of territory, and its ability to heighten or arrest our political and sentimental attachments.

“In places like Palestine, the image itself can become oppressive, as violence isn’t only what is practiced through space but is also in producing a landscape out of that violence; i.e. The Israeli built Wall isn’t there only to separate us from the land but it is there also to become our landscape. If violence can be created/realized through the image, then perhaps emancipation can be realized through the image… but can the image itself be emancipated?

“The questions I want to investigate circle around the representation of politics and art, as well as the framing of the Palestinian identity. How can photography operate as a proposition, and a political tool in the production of the space it operates in? What are the tools and techniques of this political proposition? Can we (Palestinian photographers/Artists/image makers) use our tools and techniques of production to transcend our stereotypical role as local/oppressed artists? Can we escape the tendency to fall into the trap of documenting contemporary politics and reproducing the easily consumed image by the spectator/consumer, the image of the victim?

“My work and the skills I continue to develop at the Rietveld Academy will hopefully help answer at least some of these fundamental questions,” concludes Khalili.

Saudi artist Rashed Al Shashai utilises found objects and appropriated imagery as conceptual means of pinpointing the aesthetics of the everyday, creating what he describes as a ‘semantic field’ through which philosophical questions, primarily the purpose of human existence and the functions of society, can be explored. With a playful sense of the uncanny, his Ayyam Gallery profile states, “Al Shashai seeks to engage viewers with the signs and forms of the mundane in order to facilitate a consideration of what might otherwise create tension, such as the omnipresence of media, a global descent into superficiality, and the growing epidemic of apathy that has come to define modern life.”

Born in Al Baha, Saudi Arabia in 1977 and brought up in Mecca, Rashed Al Shashai holds a Master of Visual Arts degree and is a prominent figure of the contemporary Saudi art scene. A Sotheby’s catalogue describes him as “one of the most effervescent contemporary artists from Saudi Arabia.”

His monumental installations comment on superficiality and the lack of spirituality of mankind, which is questioned throughout his body of work, says the catalogue description. “My country is changing rapidly and the changes are spreading fast, touching every part of our society – these changes are good for us,” Al Shashai told Lina Lazaar in an interview cited in a Sotheby’s catalogue note. “When contemporary art first grew in the country few years ago, people viewed it with a mix of fear and reluctance; it was hard at the time to practice my art. Thanks to the support of important patrons, artists from the older generation and a striving art scene, recently an increasing number of spectators are growing their awareness and are ready to engage with the art without any judgment. A lot of those viewers are afraid of my artistic practice, because they don’t try and understand my artistic process. However, I am very confident that things are changing and I can see in the past year a very notable evolution.”

As a conceptual artist and arts educator, Al Shashai is seen to have been influential to a new generation of Saudi talent while also nurturing local artistic practices as a founding member of the Saudi Arabia Fine Arts society and the Art Education Society. Additionally, Al Shashai is the founder and director of Tasami Centre for Visual Arts, an independent space that supports cutting-edge art in the Kingdom.

Al Shashai has widely exhibited in the Gulf region and abroad at such venues and events as Art Dubai (2012); the Annual Exhibition of Emirates Fines Arts Society, Sharjah Art Museum (2012); and the Ostraka International Forum, Sharm Al Sheikh. He is the recipient of numerous awards, including First Prize from the Media Art Show, Riyadh (2011).

Moroccan artist Mounir Fatmi, who works between Paris and Tangier, where he was born, deals in his practice with the historical matters, religious objects and their desecration, dismantling dogmas and ideologies and the relation of death with the subject of consumption. Much of his installations and films have the specificity to be produced with archaic and outdated material, such as VHS tapes.

Some of Mounir Fatmi is influenced by 11 September 2001 attacks on the United States. He produced a series of installations named Save Manhattan which show the Manhattan skyline, including the destroyed World Trade Center towers. Save Manhattan 1 is made with books, Save Manhattan 2 with videotapes and Save Manhattan 3 is a sound installation with speakers. The ultimate contribution to this project is a video where the skyline progressively dissolves itself in distorted liquefied reflection.

Fatmi states on his website his videos, installations, drawings, paintings and sculptures “bring to light our doubts, fears and desires. They directly address the current events of our world, and speak to those whose lives are affected by specific events and reveals its structure.” His work, Fatmi says, “offers a look at the world from a different glance, refusing to be blinded by the conventions.”

As a result, many of Mounir Fatmi’s works are seen as subversive or questioning convention, such as his Brainteaser for moderate Muslims, a series of Rubik’s cubes painted in black with white stripes to represent the Kaaba. In his response to the Arab Spring, Fatmi exhibited The Lost Spring, an installation composed of two brooms of 3 meters and the 22 flags of the Arab League.