Gardens of Korea: Harmony with Intellect and Nature 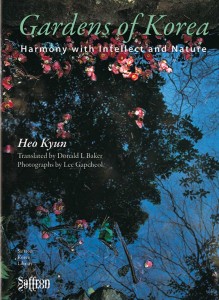 Gardens of Korea, hard cover ISBN 9781872843841 and soft cover ISBN 9781872843858, explores the history of Korea’s gardens, one of the less discussed art forms, and the connections between Korean literati and philosophers and the gardens they created. The book shows how the gardens of Korea were distinctive, reflecting the beliefs and values of the Korean scholars who designed them and enjoyed them.

Of the three great civilizations of East Asia, Korea used to attract the least attention. Overshadowed by their neighbours in China and Japan, Koreans had trouble gaining recognition abroad for the many accomplishments of their ancestors in such fields as architecture, music, dance, and the arts. That has begun to change in recent decades. As South Korea has gained economic power, people outside of Korea have begun to notice that Korea’s past is at least as distinguished as its present. It is now possible to find good English-language introductions to many aspects of Korea’s ancient culture.

However, one area of Korea’s culture has remained relatively unknown – the beauty and extraordinary story of Korean gardens has remained largely hidden from those outside Korea. This book fills that gap. Heo Kyun shows how the gardens of Korea were distinctive, reflecting the beliefs and values of the Korean scholars who designed them and enjoyed them. Korea’s traditional gardens, whether inside palace walls or in mountain valleys, manifest the Korean desire to live in harmony with nature.

Part One — The Symbolic World of Traditional Korean Gardens

Part Two — A Walk Through Some of Korea’s Traditional Gardens

6 | Country Retreats Soswaewon: Living among Mountains and Streams, Breathing in Fresh, Pure Air Buyongdong Garden: A Space for Aesthetic Philosophy To Harmonise Poetry, Song, and Dance Seoseokji Pond Garden: Enjoying the Natural World with Stones, Trees, and Flowers The Thatch Cottage on the Tea Mountain– Where Dasan Went for Walks The Old Mansion of Minister Yun Jeung: Savouring the Atmosphere of Mountain Life While Sitting in a Loft Green Rock Pavilion: Mesmerising effects of a Large, Elegant Rock Foundation

7 | Garden Homes Musan Sibibong Garden: Replicating the Realm of the Immortals with 12 Artificial Mountains The Garden at Boat-bridge Hamlet: Plucking the Geomun’go and Engaging in Studies, I Forget Worldly Sorrows The Myeong’okheon Pavilion Garden: Crape Myrtle Trees that Replicate the Realm of Immortals The Garden at the Old Yeonjeong House: Feeling like You are Deep in a Mountain Forest Mugi Yeondang Lotus Pond Garden: Why would Someone Trade a High Government Post for a Life of Ease? Gwanghalluwon Garden: Here you can find the Moon Palace, the Dragon Palace, and the Realm of the Immortals

8 | Palace Gardens The Secret Garden in Changdeok-gung Palace: Harmonising Nature and Art Anapji Pond: Appreciating the Sight of the Moon’s Reflection in a Lotus Pond Poseokjeongji Watercourse: Poems and Floating Wine Cups Nongwoljeong Pavilion Garden: On a Night When the Moon is Full, the Shadow of the Moon Falls on Water Rushing over Rocks Banghwa Suryujeong Pavilion: The Apex of Architectural Beauty, Looking as if it is Floating in the Air