Last of the master: Final paintings of M F Husain

Posted on May 28, 2014 in ARTISTS, Cotemporary art and modern art from South Asia and South Asian communities, LISTINGS, NEWS, People

Nine paintings by the late M F Husain (1915-2011), described as his final major works before his passing, are on public display at the Victoria and Albert Museum, London, 28 May–27 July 2014, writes SAJID RIZVI.

Husain is said to have told associates he planned to extend the series to at least 96 paintings but did not outline the full intended content. In the event he completed only eight, according to various conversations attributed to friends, associates and the collector family of Usha and Lakshmi Mittal, who own the paintings.

Although the general thrust of the media and political campaign against Husain is ascribed to Hindu extremist political groups and sectarian media, discomfort over Husain’s creative interventions in the pantheon of the gods has been widespread in Indian society, an overlay of an unstated inability to accept Husain as Indian first and Muslim second. Instead, a narrow tendency to see Husain as a Muslim first and Indian later was among overriding reasons that apparently drove him out of India, though not eventually to the detriment of his artistic career. 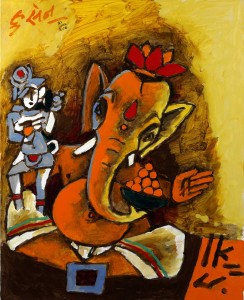 The V&A exhibition shows the eight panels on canvas, about 366cm x 183cm, plus an accomplished and inspired portraiture of Ganesha (SK: Gaṇeśa गणेश), the Hindu deity usually depicted with at least one elephant head and four arms that recently featured in a British Museum exhibition. The inclusion of Ganesha, recorded in history, mythology and theology as a patron of both art and science, enables the museum to present the total of nine as three triptychs

The intended series is variously named as an Indian Civilization endeavour or as a Vision of India through Mohenjo Daro to Mahatma Gandhi undertaking, the latter a provocative and unnecessary sop to revanchist tendencies, because Mohenjo-daro isn’t in India; it’s in present-day Pakistan. It’s a gratuitous spoiler in an absorbing narrative of pan-Asian relevance. But it’s also understandable amid an all-too-common spectacle of promoters of art of such universal appeal being swayed by the rhetoric inevitably associated with gestural and grandiose cultural events. The generic India of pre-partition British Raj, when the subcontinent was almost whole but under colonial yoke, is also a parallel reality and an academic vehicle of convenience. Only the most unforgiving of nitpickers and pedants are likely to whinge about such an oversight in today’s age of PC-speak.

In what comes to us from this prematurely plucked fruit of Husain’s fertile imagination and painterly skill, the artist undertakes an epic journey. India’s cultural diversity, its historical legacy, its societal contradictions and communal cornucopia are depicted in a characteristic and deft interplay of broad strokes, vibrant washes and minutiae of detail. Modern features of India’s chaotic and exuberant plunge into the globalisation pool occur alongside events from popular memory/history. A colour palette common to all works in the series reminds us we’re in plentiful sunshine, surrounded by myriad flavours and aromas, not all friendly to the faint-hearted.

India’s historical travails and tribulations are touched upon with brush strokes that point to the artist’s vast panoply of recollected images of acutely observed events and presences.  V&A Curator Divia Patel in a recent viewing drew attention to Husain’s treatment in the series of “invading dynasties” wherein Mughal and British rule are juxtaposed. That’s some humdinger of a topic for future discussion.

M F Husain, born 17 September 1915 in Pandharpur, in India’s Maharashtra state, honed his skills painting large advertisement panels for street display of cinematic film releases, a career path for many aspiring artists in the subcontinent but, alas, not always a proven first rung of a ladder to the dizzying heights of success. It was only later that he volunteered to be formally trained at Sir Jamsetjee Jeejebhoy School of Art aka Sir J. J. School of Art, in Mumbai (then Bombay), whose history is intertwined with the birth and development of much of modern and contemporary art in India. 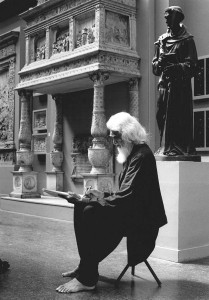 Inevitably exposure to European art trends found expression in Husain’s art, as it did in the work of other contemporaries. In Husain’s experience, this would have been akin to learning a new language of artistic expression in the same way he set about viewing and interpreting the Indian world with an honest, unfettered and catholic approach in creativity and production. It’s an approach many in India pay the lip service to, but Husain actually set out to implement, with unforeseen and unwelcome results, displacement and self-exile.

In that sense Husain’s experience with offended—and offensive—objectors to his interpretation of Hindu pantheons, despite its evident integrity and respectful approach, resonates with more recent experiences of others, notably Reza Aslan. The Iranian American academic’s life of Jesus, Zealot (2013), is still being trashed by critics who can’t abide by a scholar born into a Muslim family (although a later Christian convert and then a reverse convert to Islam) daring to write controversially about the prophet of Christianity.

The preservation of Husain’s final works in the relative safety of exile ensures he’s now more likely to be given a second chance by detractors who, far from being embarrassed, are seen to be gaining ascendancy in the fraught politics of India today. It’s important for Husain to be cherished at home, not just to be treasured abroad, as that would indicate much needed societal change in the country is not beyond repair. The Mittals, who commissioned the work in 2008 and eased Husain’s self-exile in other ways, are influential funders of art and cultural development in that country. “Spanning mythology, architecture and popular culture, the Indian Civilization Series is the final achievement of M F Husain, an artist whose work was continually inspired by the traditions of India,” says Usha Mittal, wife of the businessman. “I was privileged to see this series as it was created and am delighted that it will be shown at the V&A, a lasting tribute to Husain Sahib and his vision.”

Christie’s auctioneers helped with the temporary exhibition but its senior aides say there are no plans to bring the art works to auction.

The paintings were made in London, where Husain spent his final years. A personal vision of his homeland that Husain called “a museum without walls,” the series is richly supplemented by Husain’s copious notes, part of the exhibits, that reveal his ideas, themes and stories for each painting and in some cases explain what is depicted. They are a welcome if somewhat unfulfilling substitute for paintings that never materialised.