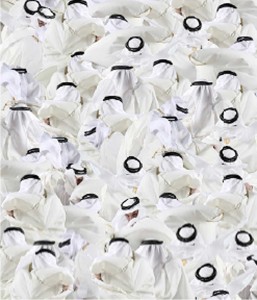 London’s EOA.Projects gallery brings together a starcast of contemporary artists from the East and the West, including hyphenated Americans and Europeans, in its new exhibition with the promising title, Very Important People, a cunning spelling-out of VIP, which usually stands for a Very Important Person. The playful licence with the much hyped and supremely abused acronym is a promising start.

The gallery’s preamble to the visual narratives to be experienced by the viewer in the show opening 6 February 2015 begins, “A Very Important Person (VIP) is a person who is accorded special privileges due to his or her status or importance. The special treatment usually involves separation from common people, and a higher level of comfort.” Or, as the gallery viewer rightly can expect, a higher level of discomfort, depending on context and location, both for the giver and the receiver of those privileges.

EOA.Projects was founded in 2009 as a gallery platform for artists working between the Middle East, Europe and United States. It moved into the present Battersea venue in 2013.

One person to watch at this gallery is British artist Stephen Stapleton, co-founder with Saudi artists Ahmed Mater and Abdulnasser Gharem of Edge of Arabia, which became active in 2003. So far the gallery has pulled off shows ranging from abstract, quasi-conceptual to figurative to multimedia, bringing under its roof artists of great diversity in content, style and technical accomplishment.